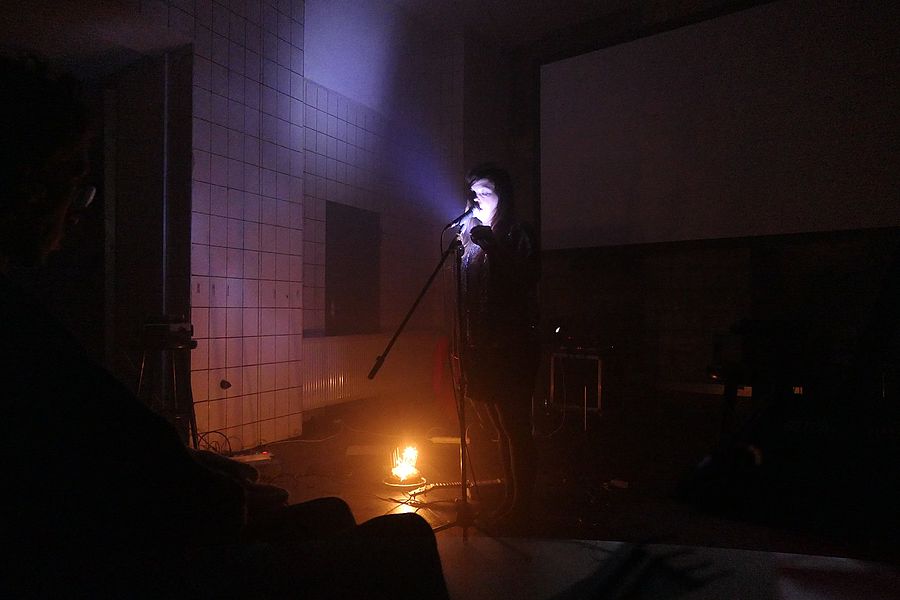 “In the journey of light and shadows” is a surreal audio visual apparition inside a light play with smoke stroboscope and analogue projection machines. The journey of light depicts the fragile equilibrium between sonic events and pulsating light movements.

The four performers create an imaginary journey filling up the space with a surrealist play of electro acoustic instruments, playing a decomposed music piece creating an imaginary scenery out electric movie set.

AudeRrose is multi-disciplinary artist working with performance, photography, sound and projection. Her imagery plays with narrative structures, developing dreamy and intimate universes, exploring various forms of interplay between body, images in motion, deconstructive narrations and self-mythology. Her performances articulate live scenography protocols integrating projection as an environment medium, considering the black box as a possible oneiric space, where sounds and images communicate in a poetic and narrative journey.

Jakob Schauer is a Vienna based sound artist and producer: with his solo project he works in the acoustic field of drone and experimental music. By mixing complex sound algorithms and pre-recorded material, Schauer creates multiple layers of sound structures in tonal and atonal moods and grows acoustic landscapes of variable physics, sizes and geometries. He will release his first solo album “Antlitz” on MOOZAK records in November 2018. In his installations Jakob Schauer researches on the interplay of space and sound and focusses on the spatial positions and movement of sounds in architecture or environments. Further he is a founding member of the „Elektroakustischen Kammermusikensembles“ (EaKmE), which focuses on improvised electroacoustic music and organizer of the concert row “Wow! Signal” and “Wow Signal Festival” in Vienna. In his music his enthusiasm for experiments and improvisation, as well as his excitement for beats and bass is recognizable.

Stefan Voglsinger is an improviser and performer based in Vienna/Austria. He studied drums, music & movement pedagogy and sound for films in Cuba. Voglsinger focuses on interdisciplinary experiments and works with sound and image, developing performances or audiovisual installations including selfbuilt or hacked electronic circuits. This leads to many collaborations with different artists and collectives in Austria and abroad as well as projects including film, dance and theatre. At Setzkasten Wien he modifies analog film projectors, works in the darkroom and the sound studio. As a curator he organizes regularly exhibitions, concerts and gives Circuit Cooking soldering workshops in schools, associations and festivals.

Philip Leitner is an Austrian musician and computer artist, born 1981 in Graz. He uses both: piano and everyday objects, to create sound. He combines Real Time Computer Post-processing, micro sounds and a prepared piano. His compositions are of aleatory essence, he describes his works as procedures, not in sounds or notes. Leitner performs solo and with numerous domestic and foreign artists with diverse backgrounds.