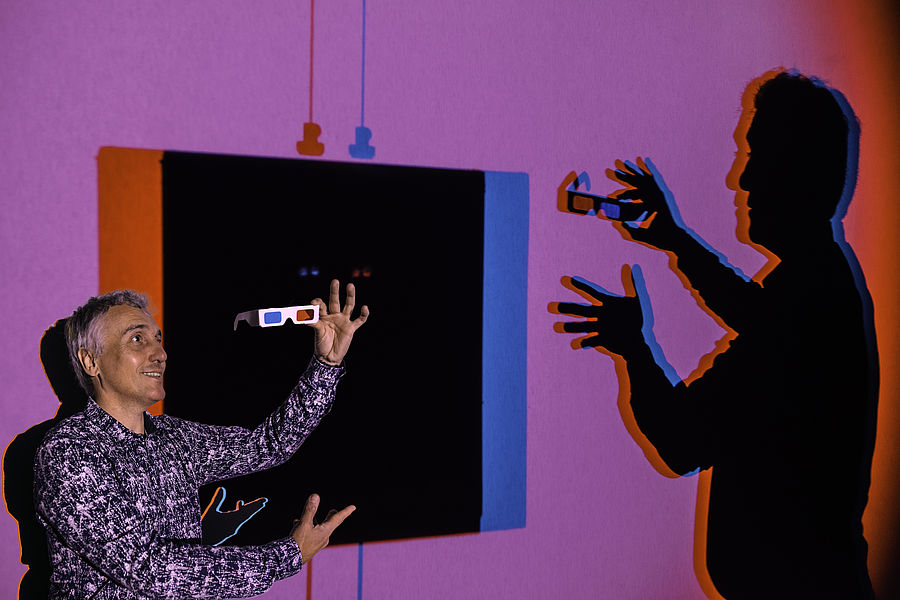 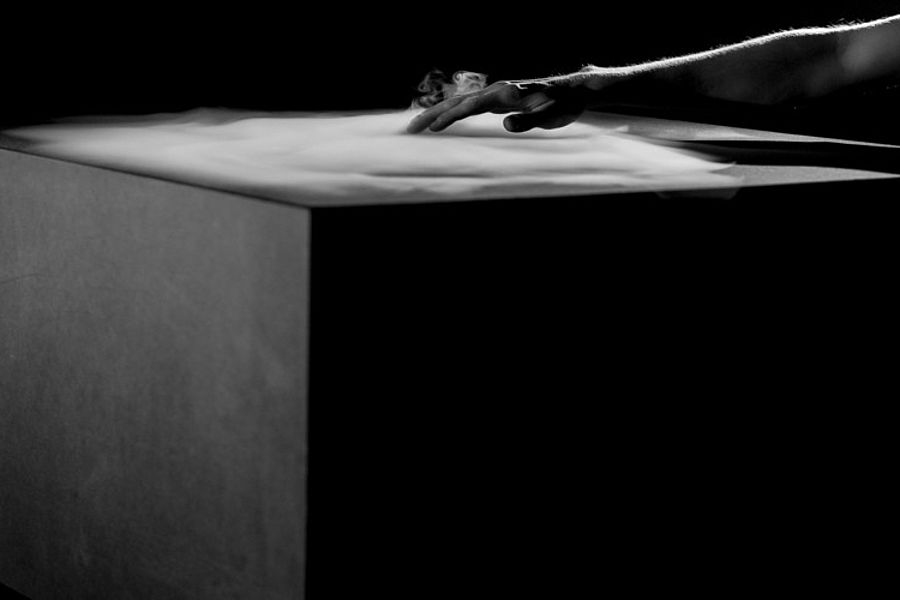 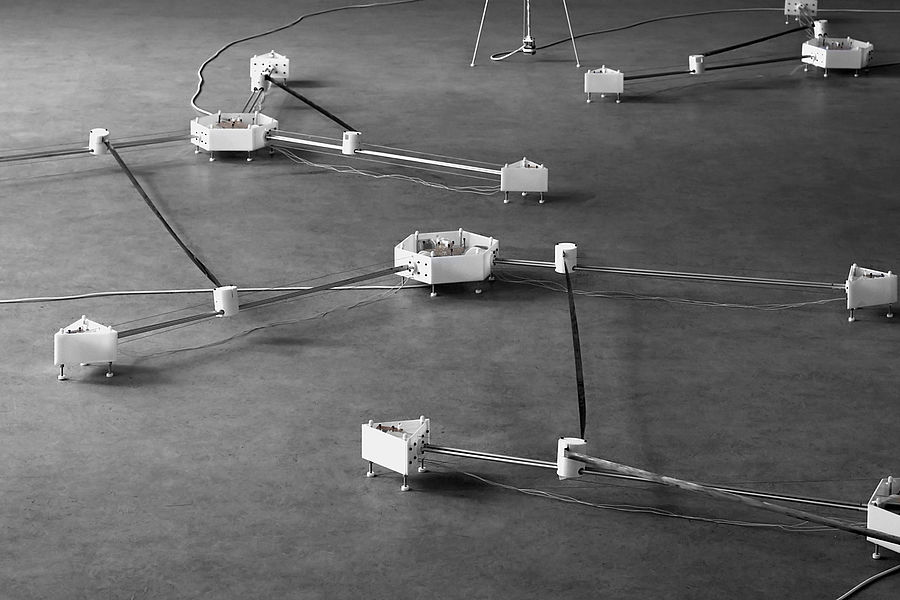 CONCEPT
The exhibition Dark Science presents artistic works that approach specific phenomena focusing on their physicality by means of the paradox underlying our human relation to them, in terms of states of absence, immateriality, evanescence and void. This pushes the boundaries of our imagination and reflects a constant need to sense and understand levels of the physical world in an observable and measurable matter. Traces and shadows of those transitory presences become the territory of exploration for artists with different approaches intent on presenting both the direct experience of the phenomena and the impact these elements produce indirectly in our culture and society.

Labofactory, Jean-Marc Chomaz, Laurent Karst & Gaétan Lerisson: VOID SPACES - Installation & Conference/Performance
Is the expansion of space, or the light that finally remembers that the universe has an age or that he no longer has one? But the shadows that our bodies cast on the distant galaxies inevitably shift to the red, leaving on our silhouettes a pale iridescence of blue. How to reverse the time and light the Universe? How to retrace the double star of your eyes? Vacuum contracted by the cry of absence. The pellucid rags of night mingle with the living. Great black sails that the solar wind rises, they transform the present into an ark of Void spaces.

The conference performance Void spaces will retrace the construction of our present Universe, how from the earth orbit, the only fraction of space physically explored by the human race, our imagination has been able to project us in the cosmos and how science or art has given an illusory materiality to galaxies in an accelerating spatiotemporal journey. The origin will be question inverting the time to see literally the word from the point of view of the light using the Redshift time machine we have invented in 2014. Dark matter, dark energy, Void spaces of our Cosmos, interrogation of our ignorance or transcendental intuition of Multivers, will be emotionally summoned during the performance and in the installation Absence.

In the Redshift installation, our shadows that the expansion of the universe shifts to red, waive the light flat tints. Black cut surfaces, they claim the four dimensions proudly placed between the sun and its prey. They float in space like shredded sky torn of the stars. The installation Redshift allows our senses to perceive the race of our planet through the expansion of space-time, the dark matter of miles blowing the solar wind.
Redshift is a purely augmented reality analogue installation. By an optical process without any recourse to digital artefacts, it allows viewers to move in a space where the shadows abstract from the surfaces on which they are casted and appear as three-dimensional ghosts. As if a fold in the universe had mixed objects and their negative imprints. These suspended planar forms move with the light source. By a reversal of the time, the process makes us see the scene from the viewpoint of the light. The absence becomes dark energy made tangible by the redshift it causes.

Absence is an installation created for the present exhibition that makes tangible a black media that refuses any motion indifferent to wave or impenetrable by light. The endless rotation of a metallic worm is incapable to drive into motion the black layer. An impassivity questioning the limit of our senses, of our perception of our command of the real. A black matter that escapes our understanding and is the missing piece of a super rotation of galactic arms but also a direct incarnation of the no return point of the anthropocene where the dust of our knowledge fails to stop the black out of the atmosphere by pollution.

Michael Kugler & Sebastian Wolf: BRUME - Installation
In Brume, the artist duo Michael Kugler and Sebastian Wolf investigate immateriality by coaxing fog into a semi-geometrical, self-organizing form. The viewer becomes a catalyst for disturbance, generating turbulences that not only illustrate the carrying power of the air, but upset a perceived equilibrium, and reveal the spatial and temporal volatility of such a phenomenon. 'Brume' operates in the margins between ubiquity and the finite, symmetry and the amorphous, transience and permanence, and gesturing at the paradox of immateriality.

Luiz Zanotello: THE AEROGRAPHER
The kinetic installation maps the air within a room. Grounded points measure the airflow in different locations, translating the difference among them to linear motion. Moving nodes travel in different axis shifting connected lines, thus unfolding a networked topography of the air in constant change. The Aerographer investigates the gaseous state of matter as Zeitgeist, and speculates on the troubled act of assembling stable grounds in times of accentuated uncertainty and ubiquitous technological mediation. What is it like to live in airlike times, when everything is transparent, and no ground lingers?

Giovanni Salice: NANOSOUND
Video installation collecting images discovered in 2013 at the Center for Functional Nanomaterials, Oak Ridge. They appear for the first time on screen showing nanostructures that have never been seen before. However, the widest part of the physical processes is in such a small scale that can be described only applying data analysis. In order to make deepest layers of the phenomenon assessable on scientific observation, these data have been interpreted into the sound domain, by converting images with a process of sonification, which reveals new levels of understanding in the nature of this matter.

JEAN-MARC CHOMAZ (FR) is a physicist and an artist. His scientific research encompasses areas such as the dynamics of soap films, global instability, vortex breakdown, geophysical and stratified fluids and biomechanics. He is a Director of Research, professor and chair at the University Paris-Saclay, and has co-founded the Hydrodynamics Laboratory he co-directed from 1990 to 2013. With more than 25 different artworks, performances or installations, his practice in Art & Science aims at exploring the sensorial and emotional foundations of science. It participates from the will to reassess the very nature of science facing the complexity, to explore and expose its human nature, weak and sublime, to distinguish observable from perceivable. Chomaz’ Installations create fractures in the real from which emerge abstract but physical Universes that the public experiments and invents calling back his own experiences and memories.

LAURENT KARST (FR) is an architect / designer who graduated from the Strasbourg School of Architec-ture and the Domus Academy Milan (industrial design). In 1995 he was awarded the Villa Medici award for his research "mobilize industrial waste - a challenge to architecture and design." He worked as project manager, designer and architect in various international architecture agencies, particularly Jean Nouvel and AREP, part of SNCF. In 2006, he foun-ded Atelier 16 - Architecture, where he developed small-scale projects with a strong concern on the issue of the material. For over 10 years he forms part of Labofactory, an interdisciplinary collective that consists of scientist Jean-Marc Chomaz, architect Laurent Karst and composer Francois-Eudes Chanfraults. Together they explore the cross-overs between the imagination of art and science.

MICHAEL KUGLER (USA) is a media artist and filmmaker whose practice engages 'psychogeographic' modalities—practices, rituals, and spaces in which these occur. His recent work traverses the nebulous margins of science and art. He currently lives and works in Berlin.

SEBASTIAN WOLF (DE) creates interactive video and light installations. His work explores the relationship between nature and humanity and employs a fundamental approach to artistic creation that seeks the inherent aesthetic and emotional potential of novel technologies. He currently lives and works in Berlin.

LUIZ ZANOTELLO (BR) is a Brazilian media artist/designer based in Bremen. His work occurs within digital media studies, often through kinetic installations, poetic machinery and speculative interactions. He has exhibited at two editions of FILE in São Paulo (2011/2012), at the Museum of Applied Arts in Vienna (2013), at the Dubai Design Week (2015), at the Resonate Festival in Belgrade (2016), as well as in different exhibitions in Germany. A designer graduated by the São Paulo State University in 2012, he is currently a masters student at the Digital Media program of the University of the Arts Bremen.

GIOVANNI SALICE (IT) is an Italian artist/musician working in the field of sonic-media. He holds a degree in classical oboe. After this education, he studied electronic music and visual arts and, through the years, he increased his interest into film and installative art. He is currently working on microscopic sounds, Artificial Intelligence and field-recording.