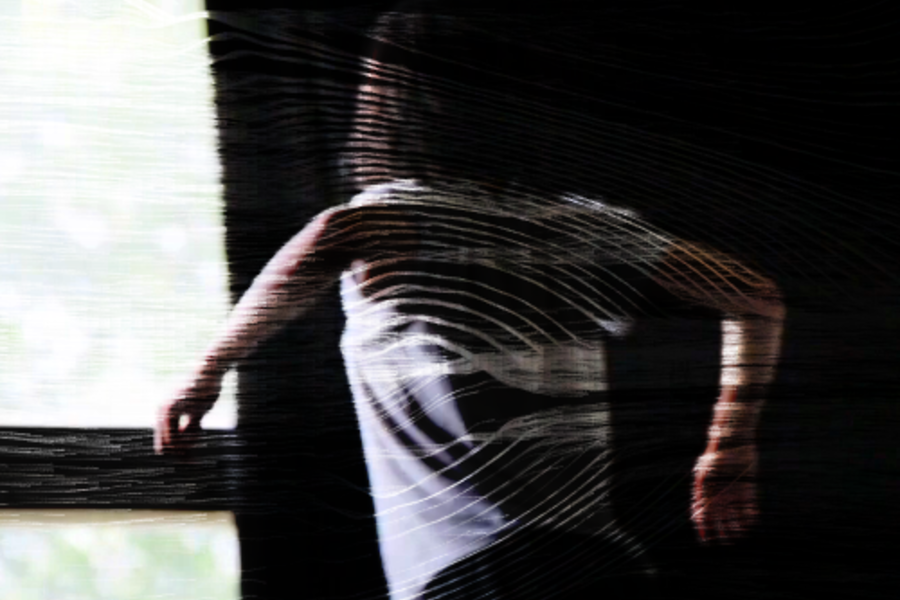 Transformation VII deals with the simple relationships between visual and sound rendering and the interaction between the physical body. By defining this relationship, a sounds object is created that can be ’communicated’ with musical form. the focus is on the activity of presenting motion while triggering sounds. The combination of these different media can lead to different layers of computer-mediated interaction between sound, visual and physical movement processes. Three identical targets moving across each other can be perceived either to bounce off or to stream through each other.

The work is set in a variety of to the level of organisation of the structure stemming from the abstract musical composition. The dynamics between Poem and Chants provides a point of the musical contras. Dissonance occurs on the prime number with new sounds source. The feedbacks leads to climax in the composition. The piece uses difference texture for the audio process (audio sample, noise, dissonance, voice), kinect sensor, sound object and visual graphics by motion tracking.

MyungDuk Kim (1981, KyoungBuk, South Korea) creates sounds and visuals and performances. By questioning the conceptional transformations movement, MyungDuk finds that movement reveals an inherent awkwardness, a humour that echoes our own vulnerabilities. The artist also considers movement as a metaphor for the ever-seeking man who experiences a continuous loss. His artworks directly respond to the surrounding environment and use everyday experiences from the artist as a starting point. Often these are framed instances that would go unnoticed in their original context. With a conceptual approach, he tries to develop forms that do not follow logical criteria, but are based only on subjective associations and formal parallels, which incite the viewer to make new personal associations. His works interaction sounds with the movements of humans body/or objects. By doing so, new sequences are created which reveal an inseparable relationship between motion and sound. By choosing mainly formal solutions, he tries to approach a wide scale of subjects in a multi-layered way, likes to involve the viewer in a way that is sometimes physical and believes in the idea of function following form in a work. His works are based on formal associations which open a unique poetic vein. Multilayered images arise in which the fragility and instability of our seemingly certain reality is questioned.