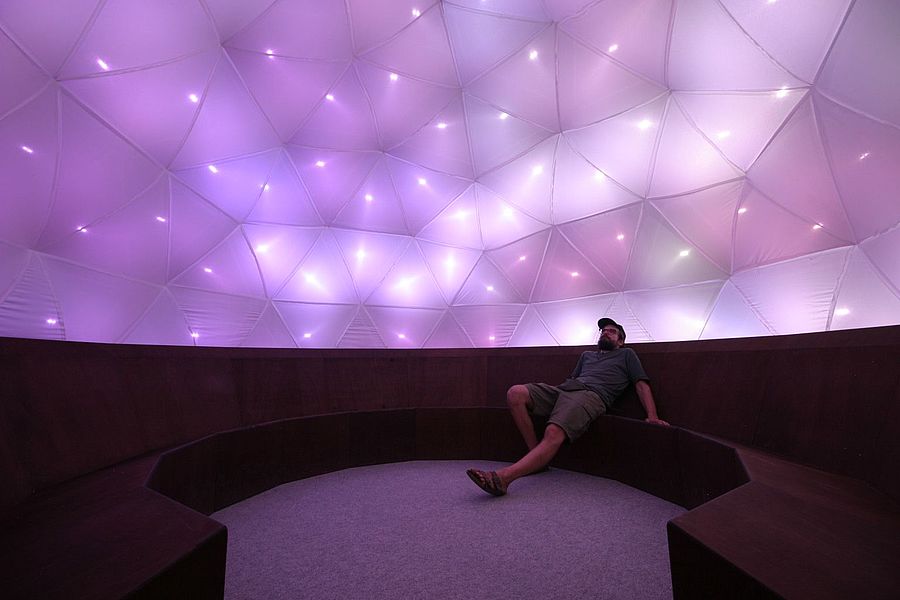 concept of the Ambisonics dome

The collaborative project Klang-Raum-Skulptur is a dome-shaped sound installation that utilizes an immersive 3-dimensional sound system, premiered at Spektrum Berlin at the 22nd of September as part of the festival "Monat der zeitgenössischen Musik". The installation was originated by Paul Deme who developed the initial spatial concept. Attracted by the sculpture’s ideal form for the use of Ambisonics spatialization, Sven König (sCrAmBled?HaCkZ!), joined the project and installed the Ambisonics system inside the dome.

Frank Brettschneider - TONGITTER / SOUND GRID is a piece for a modular synthesizer system and multichannel speaker environment, specially designed for the Klang-Raum-Skulptur project: a dome-shaped sound installation that utilizes an immersive 3-dimensional sound system at Spektrum Berlin / 22-24.09.2017. A number of oscillators form a matrix that is organized to interact/affect each other to produce a variety of sounds: from delicate, subtle sequences to rough walls of noise. The individual oscillator outputs are connected to the hardware input of the loudspeaker array, with the Ambisonics technology distributing the sound through the space of the dome. The oscillator structure was realized with a digital Clavia Nord modular synthesizer system. Thanks to Sven König, Julius Holtz and SPEKTRUM.

Julius Holtz - Fragments of Fiction is an immersive sound narration that is built by utilizing the possibilities of ambisonics sound spatialisation. The piece takes the listener on an auditive journey through sonic landscapes that merge and deform constantly. A just intonation tuned drone connects materials of different origins: Objects, field recordings and synthesized sounds.

Marisol Jimenez - Cuicári heciariya belongs to a series of works inspired by the concept of transformation as expressed by rituals of the Wixárika culture. The title closest translation could be singing light. Jimenez music is derived by a fascination with the interplay of the entropic within the structured musical machinery, colliding the primeval with the technological to seek forceful sensuous and visceral energies.

Frank Bretschneider is a musician, composer and video artist in Berlin. His work is known for precise sound placement, complex, interwoven rhythm structures and its minimal, flowing approach. Bretschneider’s subtle and detailed music is echoed by his visuals: perfect translated realizations of the qualities found in music within visual phenomena.

Bretschneider (1956) was raised in Karl-Marx-Stadt (Chemnitz since 1990), where his aesthetic developed as he listened to pirate radio and smuggled Beastie Boys tapes in the former East Germany. After studying fine arts and inspired by science fiction radio plays and films he began experimenting with tape machines, synthesizers, and modified guitars in 1984, as well as exploring the possibilities of exchange between visual art and music by various means such as film, video and computer graphics. In 1986, after establishing his cassette label klangFarBe, Bretschneider founded AG Geige, a successful and influential East German underground band. Though limited to the East before the wall came down, they were invited to perform across Germany and internationally after 1989 and released three albums before splitting in 1993.

In 1995, Bretschneider and fellow AG Geige member Olaf Bender founded the Rastermusic record label which eventually merged with Carsten Nicolai’s noton to form raster-noton in 1999. Most of Bretschneider’s early solo albums - about half a dozen - were under the alias Komet, the first, SAAT, appearing in 1996. Since then Bretschneider has released his work (in addition to raster noton) on various labels including 12k, Line, Mille Plateaux or Shitkatapult, and contributed to some well-known compilations like CLICKS & CUTS on Mille Plateaux and raster-noton’s 20' TO 2000 series. 2001’s CURVE, his second album for Mille Plateaux, was critically acclaimed and brought Bretschneider international attention. Followed 2003 by GOLD, raster-noton’s most blatantly pop album by then. GOLD, however, was topped by the percussive masterpiece released in late 2007, RHYTHM, an album that was rated very highly by several major electronic music publications, notably »The Wire« magazine, who put the album among their top releases of 2007.

2010 saw the release of EXP, a rather complex and abstract audio-visual work and his 2012 album KIPPSCHWINGUNGEN explores the sound of the Subharchord, a unique electronic instrument based on subharmonic sound generation. SUPER.TRIGGER, his 2013 album for raster-noton, is an absolute trove of percussive tension. And his newest, SINN + FORM, is all about improvisation and analog modular synth chaos.

Richard Scott is a free improvising sound artist and electroacoustic composer, working with electronics including modular synthesizers and controllers such as the Buchla Thunder and Lightning and his own self-designed WiGi infrared controller developed at STEIM. He has been composing and performing for over 25 years, recently working with Evan Parker, Jon Rose, Richard Barrett, Kazuhisa Uchihashi, Shelley Hirsch, Ute Wasserman, Michael Vorfeld, Frank Gratkowski and his own Lightning Ensemble. He studied free improvisation in the 1980s with John Stevens, saxophone with Elton Dean and Steve Lacy, and electroacoustic composition with David Berezan and Ricardo Climent. He has released many albums, for example with Grutronic and Evan Parker for PSI records, The Magnificence of Stereo (sruti BOX) and has a solo double modular synthesizer LP, Several Circles, and an album with Sidsel Endreson, Debris in Lower Earth Orbit, released on CUSP Editions in 2016.

Julius Holtz is a Berlin based composer, musician and multidisciplinary artist. His work combines contemporary music composition, sound installation, video and performance. Through recontextualisation of aesthetic language of various formats and media, Holtz develops new fields of artistic experiments. After receiving a Master of Arts degree in Sound Studies from the Berlin University of the Arts, Holtz became an active member of Berlin`s experimental music scene. He performed at venues such as Ausland Berlin, Quiet Cue and Acker Stadt Palast.

As Klangregisseur Holtz has worked with choreographers Ian Kaler and Adam Linder. He is the author of multiple film scores for experimental films and big German cinema productions. His music has been released on experimental music labels and broadcasted on Deutschland Radio. Beyond his appearance in Germany Holtz `s work has been presented in a large amplitude of locations: From rural areas in Portugal and Alaska to festivals and institutions in the USA, Mexico, Argentina, Scandinavia and Europe. These include New Fest Filmfestival (Jay, New York, 2008), Haus der Kulturen der Welt (Transformationen, Berlin, 2009), Wet Sounds Festival (Paraconsistent Invention, London, 2011), Centro de Cultura Digital (Vakuum, Mexico City, 2014) and the Ultima Festival (Yuaríya Valcári with Marisol Jimenez, Oslo, 2016).

Marisol Jimenez is a composer and multidisciplinary artist from Guadalajara, Mexico. Her output includes numerous chamber and electronic works, as well as sound & mixed media installations and collaborations with visual and video artists. As she has a deep fascination with the tactile process of creating sound, most of her electronic and mixed media works involve self made instruments, found objects, and collected sound materials from her own field recordings, improvisations and performances. Her music has been performed by ensembles including the Arditti String Quartet, Ensemble Surplus, Ensemble Recherche, Ensemble Intercontemporain, International Contemporary Ensemble, the Freiburger Barockorchester, Phoenix ensemble, SfSound, CEPROMUSIC,The London Sinfonietta.