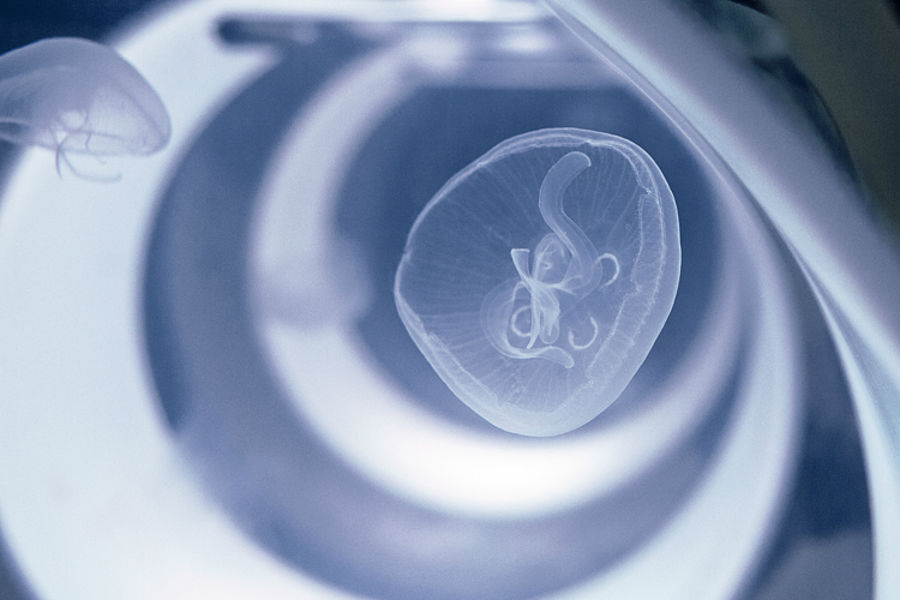 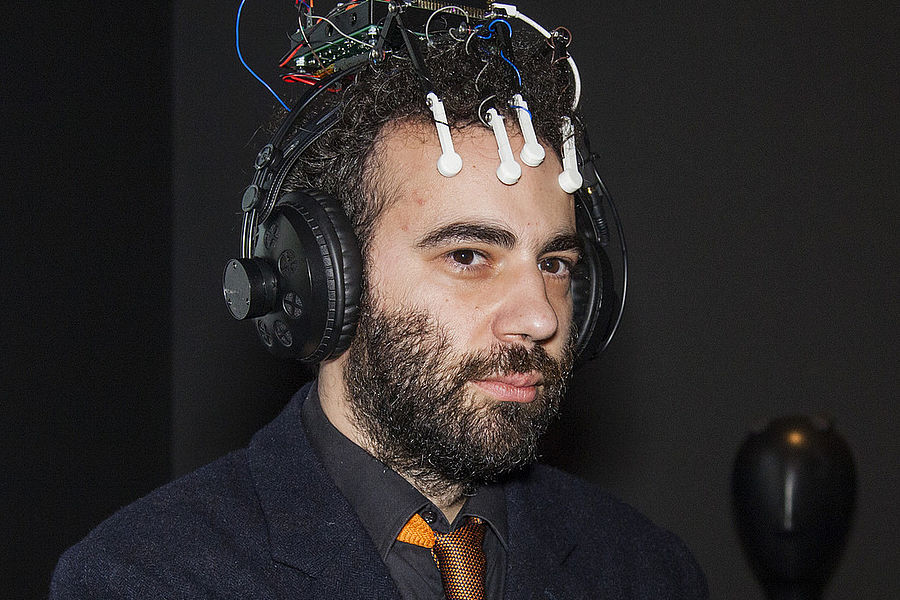 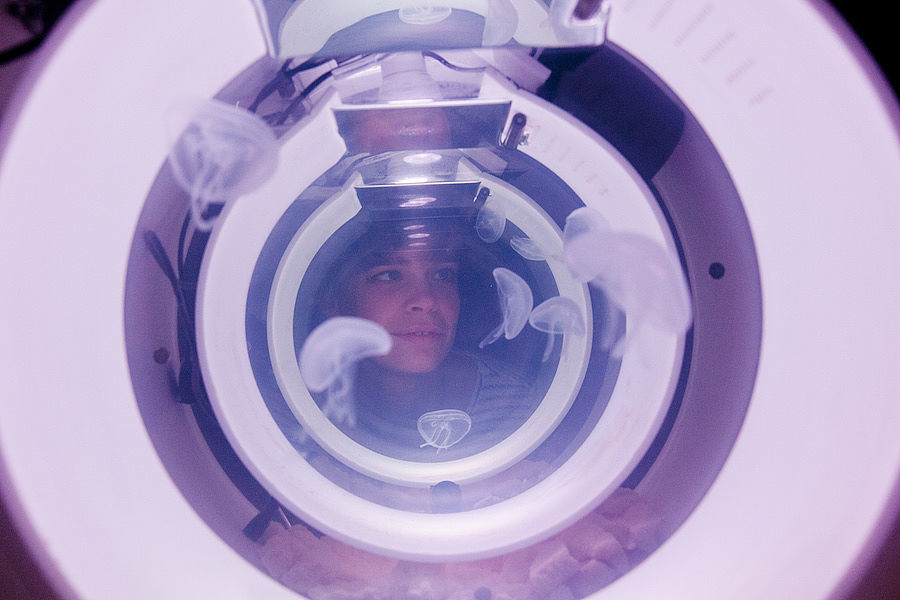 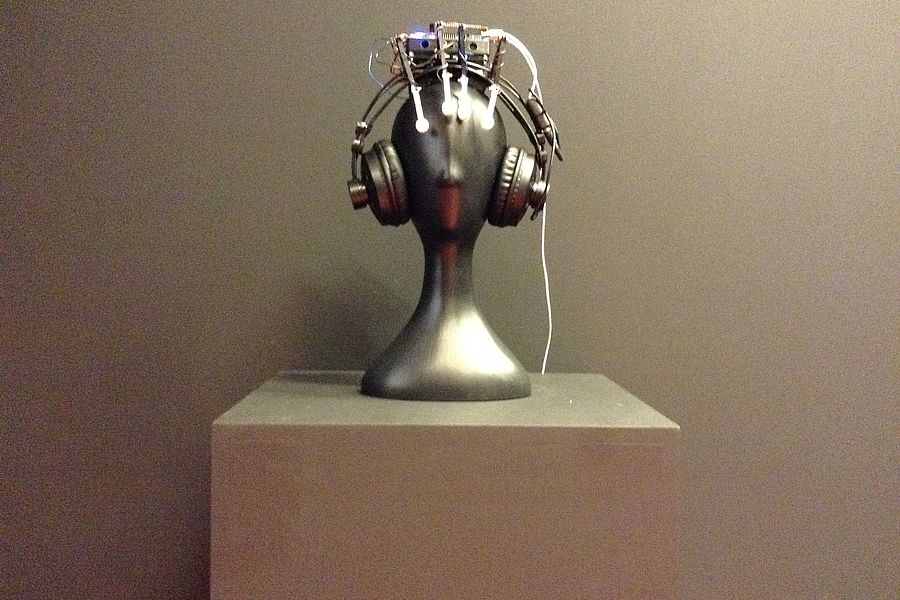 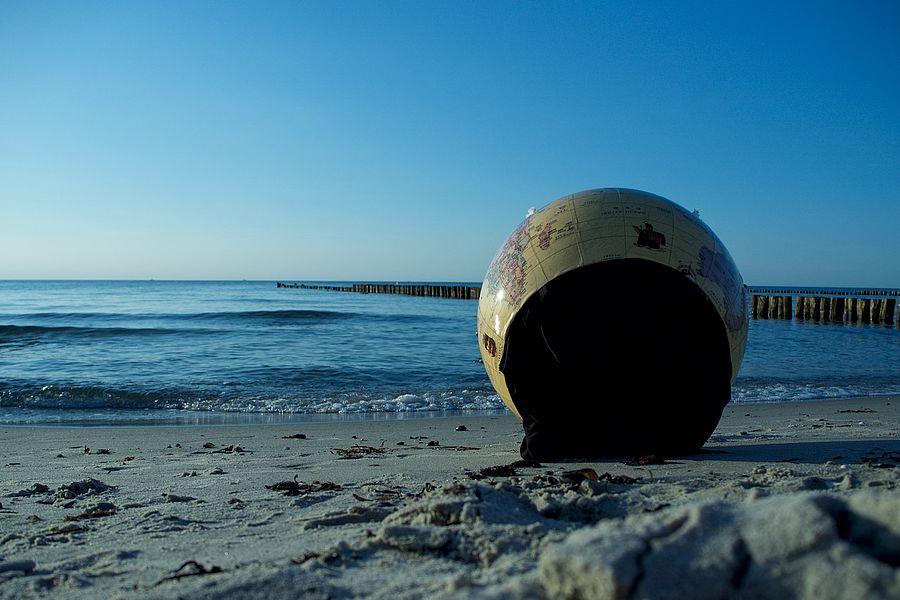 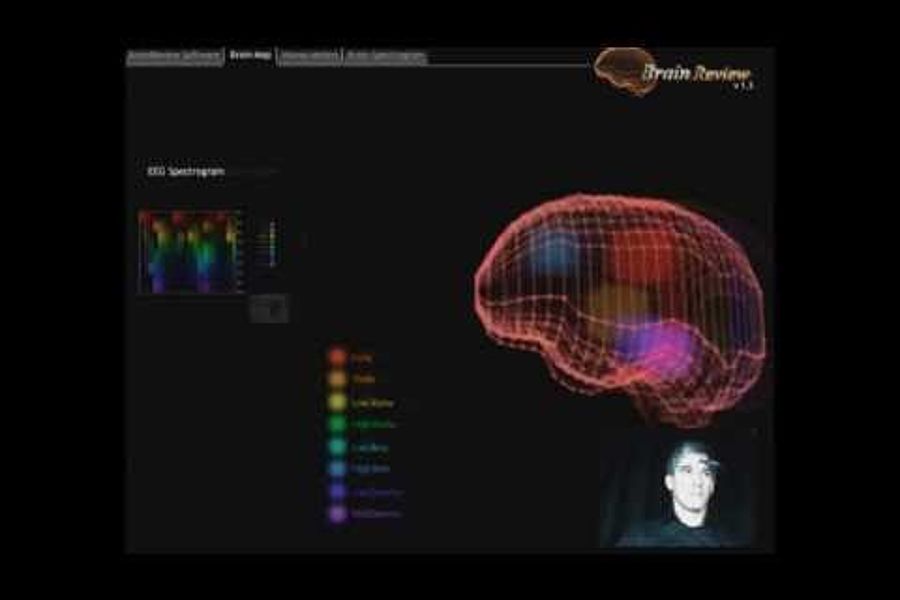 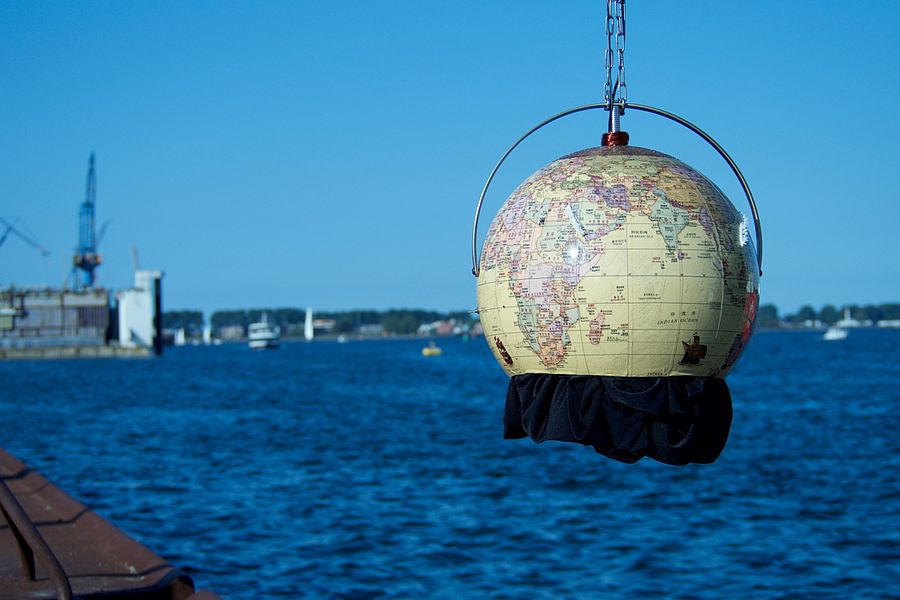 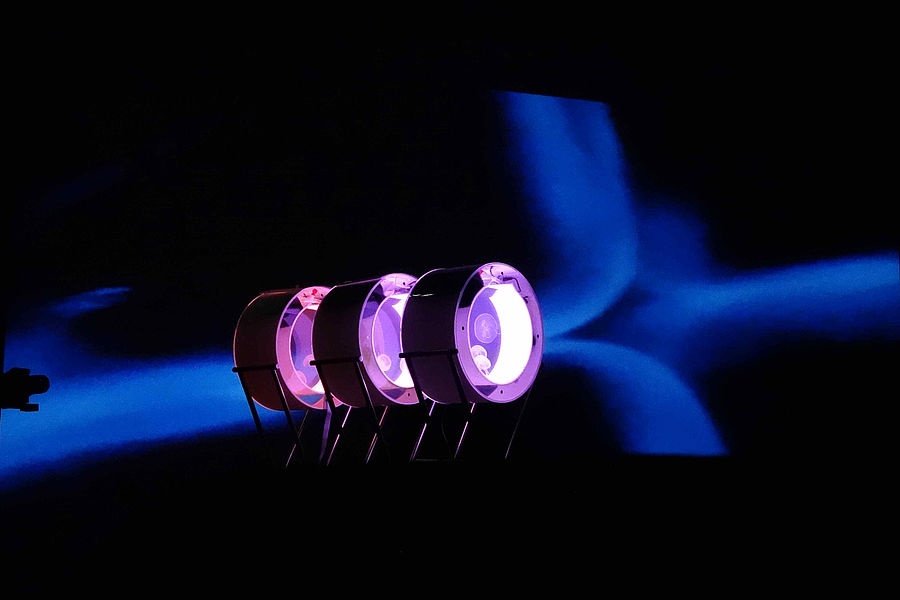 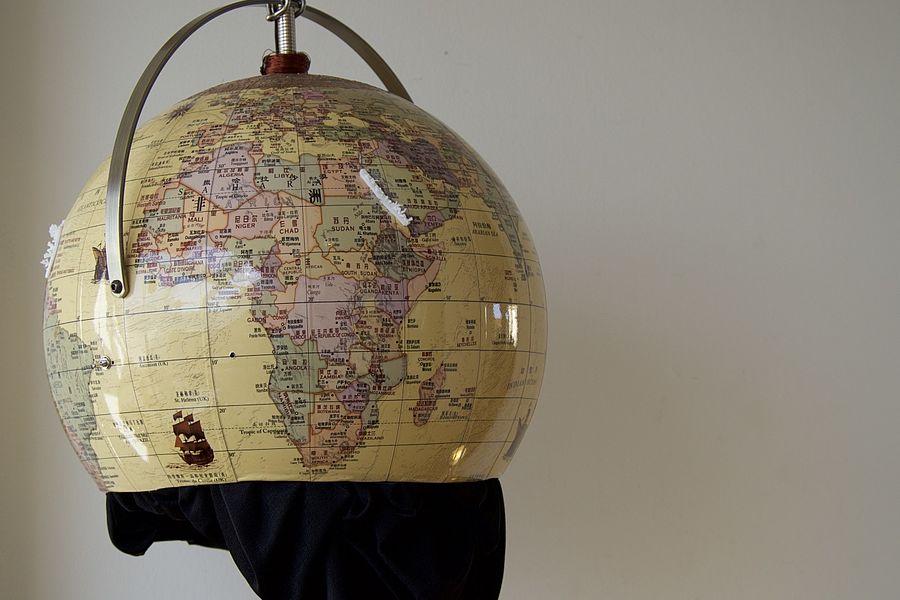 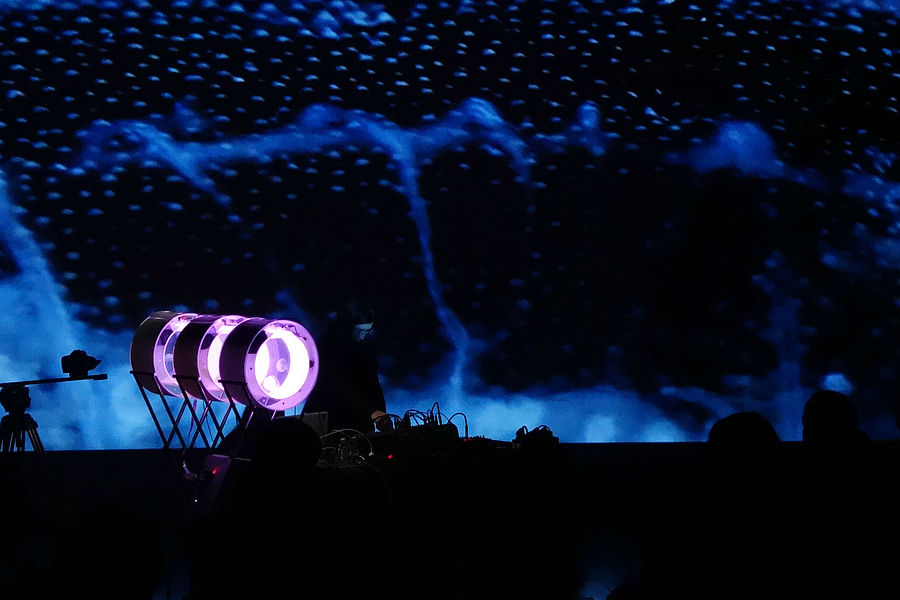 The exhibition Alien Organs recalls the tradition of experimental sound art on building new musical organs – or musical machines – expanded to field of interest not immediately intended usual to music. Sonification is the method enabling artists to bridge the vibrational domain into a very different sphere such as the biological world.

Living materials are complex and rich organized systems highly responsive to environmental conditions and infinitely reproducible. Cycles of life and other biological processes unfold the artistic interest to explore this sonic periodicity and behavior of the bio-domain in terms of vibrations.

Sonification in the Science of today plays an important role on analyzing, by means of patterns recognition, the nature of these materials. By listening to the sonic translation of data – or other mapping techniques – scientists and artists catch new layers of synchronicities in biological processes. Artists and scientists collaborate in researching new ways to make experienceable on the human senses, these organized biological forms. Solutions related to statistics such as machine learning and neural networks becomes powerful tools to unveil further interpretations.

The exhibition is part of the Sonic Vibrations Series curated by Alfredo Ciannameo. Sonic Vibrations is a series of hybrid events presenting scientific and technological research applied to sound-art, new musical instruments and installation art in form of exhibitions, conferences and live acts. Principles of Physics, Mathematics, Biology, Psychoacoustic, Body Anatomy and so on are used by artists creating media works which are pushing the definition of cross-disciplinary boundaries between technology and science applied to vibrational art. We thank Musikfonds, the Re-Imagine Europe project (funded by the Creative Europe programme of the European Union), the Embassy of the Republic of Slovenia Berlin and Art Laboratory Berlin for their kind support in making this exhibition possible.

Aurelia 1+Hz / proto viva sonification is an performance that explores the phenomena of interspecies' communication, sonification of the environment and the underwater acoustic / bioacoustics.

An interactive performance features live transmitted sound generated by Aurelia Aurita - moon jellyfish and performer. Sound loops are containing recordings and sonic experiments of jellyfish in closed environment and prerecorded from the jellyfish blooms at the sea. Both are mixed into a new sound scape score which is assembled into immersive sonic and visual experience.
For over 500 hundred million years’ jellyfish have been pulsating in the world's oceans and seas. Nowadays, amidst the immense environmental changes, their numbers are rapidly growing. Jellyfish are one of the rare organisms that seem perfectly suited for the Anthropocene era. The current 6th Mass Extinction may not apply to them. There are several species of jellies (some of them immortal), however, it is not established (yet) how they communicate? Do they feel vibration?

Aurelia Aurita has rudimentary sensory nerves at the base of its tentacles which allows it to perceive light, smell and orientation. Its gravity receptors (calcium crystals) are the same as with humans' inner ear. These sensitive structures are providing positional information to the animal based on the direction of gravity. The odyssey into the exploration of interspecies communication is a way of discovering parameters to restore a deep relationship within all of life and it is a key to better understanding of the earth's environment. The relationship between human and animal is a key to better understanding of natural environment. Humans have massive impact on other species and thus it is crucial to decode what they signal us and how they see us.

“There are still songs to sing beyond mankind”
(Paul Celan)

Inhibition revolves around an ‘intelligent’ headset that is capable of EEG (electroencephalography), algorithmic sound synthesis and machine learning. With the headset on, neurophysical activity is constantly monitored and those particular kinds of sounds that are most likely to inhibit concentration are generated, hindering direct man-machine coupling and destabilising the subject’s cerebral rhythms. In this way a new kind of uncanny ‘meta-mind’ is brought forth, one that is enacted on top of machine learning schemata, neuro-feedback and bio-technological autopoiesis.

Embracing the open-source software/hardware paradigm, Inhibition forwards hands-on audience participation and community-driven experimentation. Electronic schematics, 3d-printable/cnc-millable models and code are made available at www.inhibition-eeg.com, where audiences may also socialise with one another, contribute technical material, and upload images/video showcasing their own creative outcomes.

At the same time, local audiences are invited to create their own individuated headsets in dedicated workshops, to exhibit them alongside the artist’s original prototype, and to participate in a series of performances, technological showcases and impromptu ‘music ensembles’ in-situ. In this way Inhibitions seeks to demystify and to democratise the technologies it revolves around, to inaugurate a creative interlocking between the artist and audiences and, eventually, to become an inter-disciplinary playground where paradigms of emergent, hybrid and synergetic bio-technologically produced cognisance may be tried out. Inhibition has been commissioned by Ars Electronica and the Onassis Cultural Centre.

The crisis for corals and in our seas is intrinsically linked to humanity’s reliance on fossil fuels. We release carbon dioxide into the air, causing temperatures to rise and ice to melt, we use them to make plastics, and we burn them to move ourselves around. The Coral Empathy Device is an experiment in interspecies empathy, to create a conversation between humans and corals under anthropogenic influence. It explores differences in the way we perceive the world, and translates between a coral’s physical experience in its native marine environment, making its experience understandable to a human in their native terrestrial environment. Worn over the head, the device is driven by hydrophone recordings from the marine environment and DIY chemistry investigations into microplastic pollution near Norwegian coral reefs.

It uses principles behind speaker technologies, sound conveyance, touch and smell to create a vibrating immersion that bypasses the visual and disrupts usual modes of cognitive engagement. It surrounds the wearer in a sensory experience that evokes the marine environment and creates a conversation between us and coral in our role as environmental stewards. The artwork is informed by research into embodied cognition, coral biology and exchanges with marine and interspecies researchers.


KAT AUSTEN & HIROSHI MATOBA: THE MATTER OF THE SOUL
concentration performance with video by Hiroshi Matoba

Thanks to human activity, oceans are drastically changing. Seawater is less salty, and is becoming more acidic, causing coral bleaching and death. The performance,The Matter of the Soul | concentration, by Kat Austen with live video from Hiroshi Matoba, is a sonic exploration of acid crystal immersion. By controlling acidity and salinity, scientific instruments scream their truths about the consequence of changing oceans.

This is a prototype for an installation that explores the cycle of nature in an auditory way with a special focus on exploring sounds and noises of growing and decay. The 4-channel sound composition offers a representation of (a) the visible growth processes and (b) the hidden internal communication flows between environment, pilei and mycelium combining randomized processes, granular synthesis and field recordings.

Robertina Šebjanič (SI) based in Ljubljana/ is working in the cross field of art – technology – science. Her art – research focus is since several years within cultural, (bio)political, and biological realities of aquatic environments and ecologist, which serves as a starting point to investigate and tackle the philosophical questions on the intersection of art, technology and science. Her ideas and concepts are often realized in collaboration with others, through interdisciplinary and informal integration in her work. She is a member of Hackteria Network and Theremidi Orchestra. She got an Honorary Mention @Prix Ars Electronica 2016, STARTS2016 nomination and nomination for the White Aphroid award. Robertina is part of SHAPE platform 2017. She performed / exhibited at solo and group exhibitions as well as in galleries and festivals: Ars electronica Linz, Kosmica festival_ Laboratorio Arte Alameda_Mexico City, Le Cube_Paris, Art Laboratory Berlin, ZKM_Karlsruhe, re:publica_Berlin, Mladi Levi_Ljubljana, Strictly Analog_Ljudmila,Piksel_Bergen, Device art 5.015 at Klovičevi dvori_Zagreb & Eastern Bloc_Montreal, Eyebeam_New York, PORTIZMIR#3_ Izmir, Kiblix festival_Maribor, Gallery Kapelica_Ljubljana and more….


Slavko Glamiočanin (SI) started in the computer 'demoscene', where he was mostly active in making music, co-created the first slovenian breakbeat compilation 'Monkorama' which contained his creations as well. He continued with programming and exploring the media and for that purpose he created a programming platform naprava. After one-way video/effects he proceeded with interactive projects, motion capture, kinect and openGL visualizations. Main interests: synesthesia, complex systems, interactive.

Marinos Koutsomichalis is a media artist, scholar and creative technologist. He was born in Athens, GR (1981) and has since lived and worked in various cities around the world. His interests comprise hypermediacy, post-humanism, distributed cognition, computational aesthetics and DIWO, while the most persistent themes in his artistic corpus are self-erasure and the post-self. He strives for contextual and geographical disparity so that the working tactics, materials and technologies his projects revolve around are ever-renovated. Accordingly, he has presented his work internationally in all sorts of milieux: from leading museums and biennales, to industrial sites, churches and underground venues and he has pursued research/artistic projects, led workshops and lectured at various academias, institutions and project-spaces worldwide. He is responsible for numerous publications in academic journals and conferences, for a series of audio albums, and for writing the ‘Mapping and Visualization with SuperCollider’ book. He is the the founder of ‘Ubique Media’—a company offering ad-hoc software/hardware solutions for media artists—and has worked as a developer in various third-party projects. He has a PhD in Electronic Music and New Media (De Montfort University, GB) and a MA in Composition with Digital Media (University of York, GB).

Theresa Schubert is an artist and researcher in the intersection of art and science –– a slime mold enthusiast and self-thought mycologist from Berlin. She researches the role of creativity and collaboration from a posthuman perspective. Her work combines audiovisual and hybrid media to conceptual and immersive installations or works on paper whereas she treats nature's phenomena not only as inspiration but as a material and critical process. By means of transdisciplinary methods, such as the re-enactment of scientific experiments, biohacking, theoretical analysis and collaborative practices, her works deal with themes of self-organization, interspecies communication and morphology of forms. Theresa Schubert's work has been exhibited internationally. Venues include; Ars Electronica, Linz, Art Laboratory Berlin, KW Institute for Contemporary Art Berlin, Electro Fringe Festival Australia, Istanbul Biennial, and European Media Art Festival. Recently, the journals “Antennae”, "Wired" and "Art in Berlin" have reported on her work. In 2015 she published the book “Experiencing the Unconventional. Science in Art”. Her work “Growing Geometries” received the NTAA – New Technological Art Award 2016.

Kat Austen is a person. She is a succession of experiences and an assemblage of aspirations. Her interactive artworks explore embodied routes into themes of environment, social justice and digital culture, exploring networks of unseen influence and truth-seeking actions through multimedia experiential means. She is Artist in the Arctic for Friends of SPRI, University of Cambridge, Bonhams and One Ocean Expeditions; Cultural Fellow in Art and Science at the Cultural Institute, University of Leeds; lectures at University College London’s Bachelor’s Arts and Sciences BASc and is Artist in Residence in UCL’s Faculty of Maths and Physical Sciences. She has a PhD in environmental chemistry from UCL and consults in participatory methods, sustainability, design and interdisciplinarity.