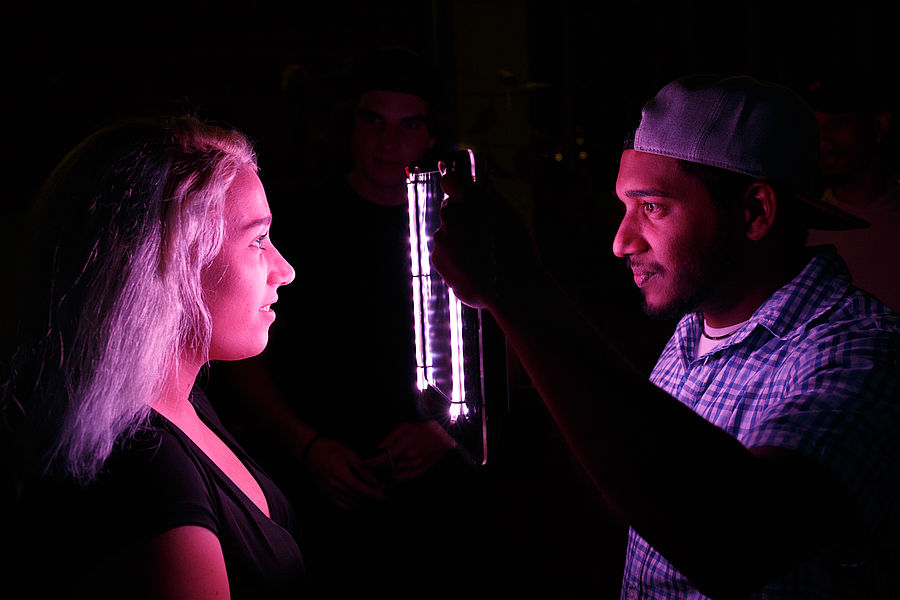 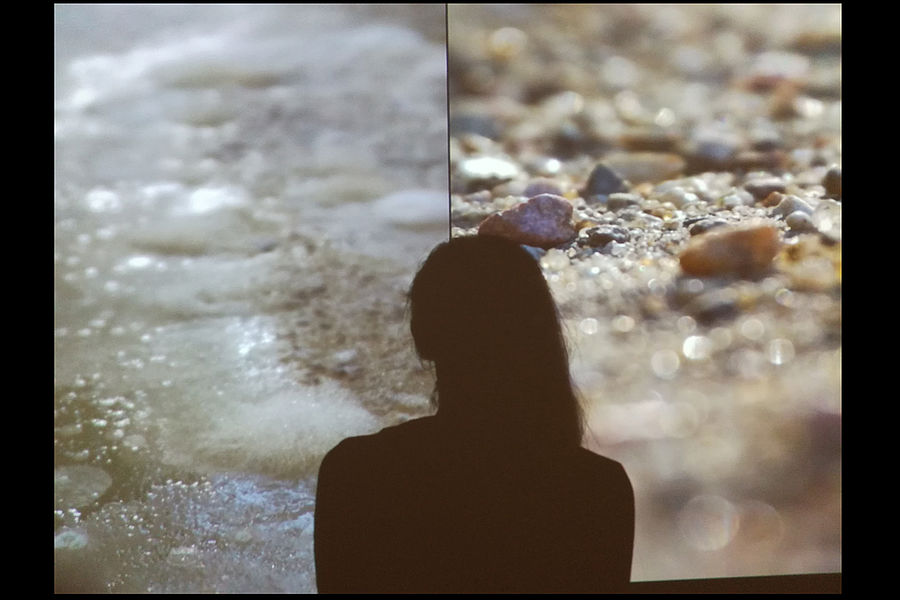 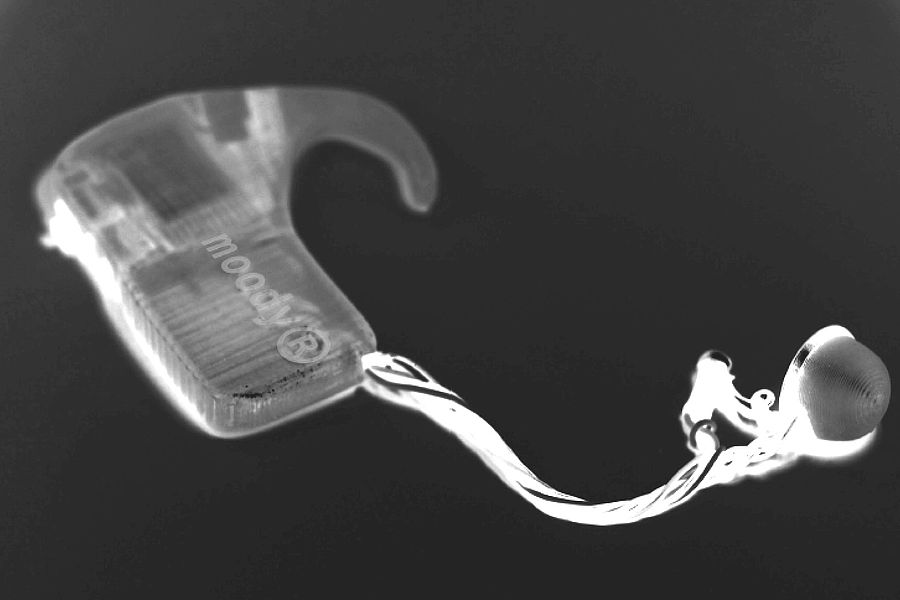 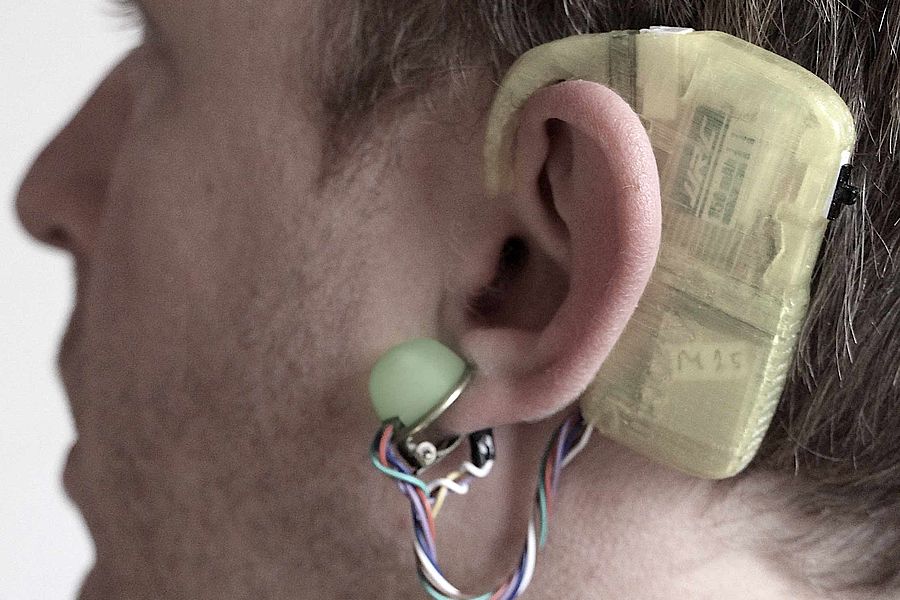 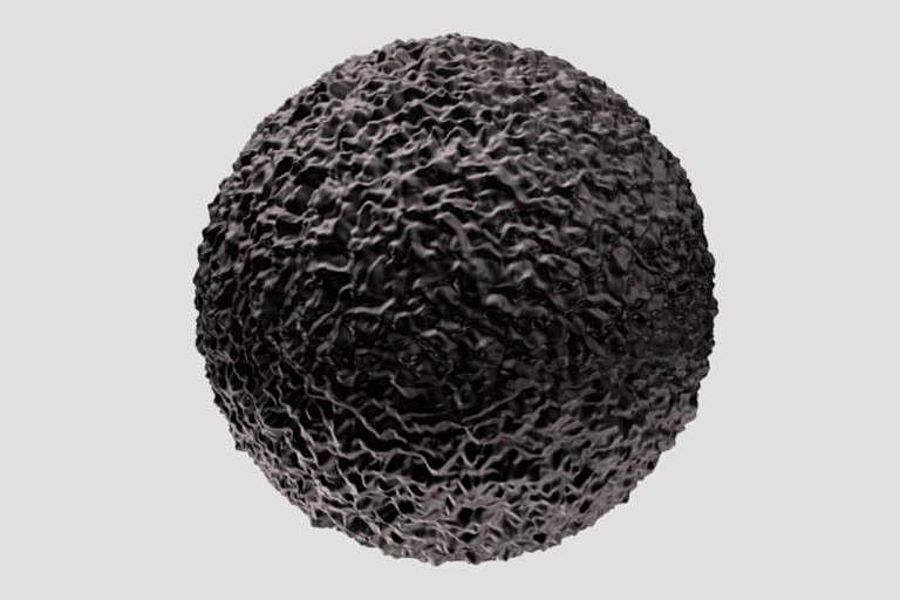 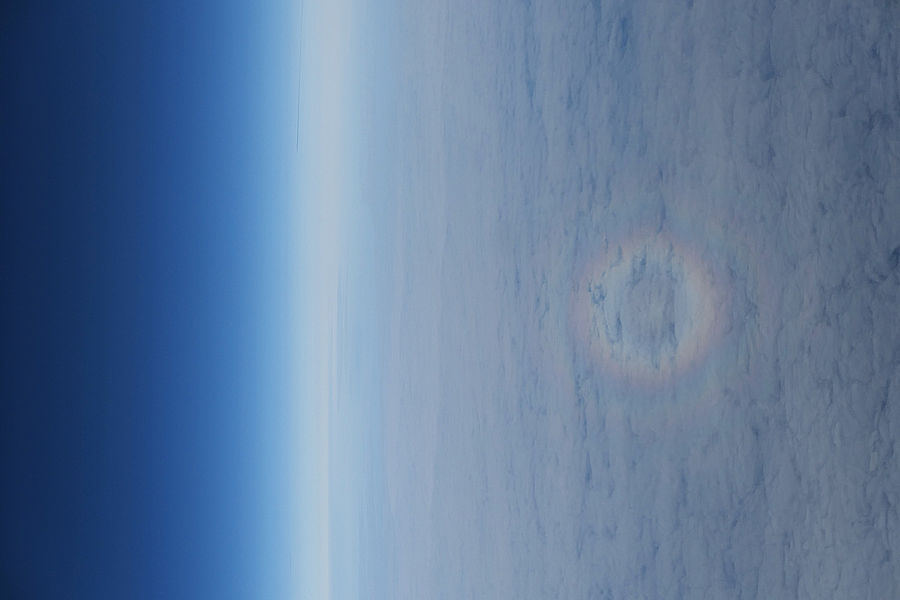 curated by Alfredo Ciannameo for SPEKTRUM in collaboration with TRANSMEDIALE. Supported by the Senate Department for Culture and Europe.

In the exhibition Creating Empathy, Spektrum presents works investigating the relation of the self with the other person and, more generally, humans with other life forms. In neuroscience, empathy is defined as the ability to understand and share someone else’s feelings by means of a mirroring effect provided by special type of neurons—mirror neurons—in both animals and humans. This reflective state of feeling-the-other as a means of sustaining the nature of the relation between beings is affirmed via the ongoing evolutionary success of technology.

What if artists created approaches to critically expand this mirroring effect between people by using machines? When do tools and knowledge of technology and science become meaningful enough to catalyze social empathy in new cultural and artistic forms? And could it possible to technologically extend this sense of feeling-the-other to non-human creatures or things?

Our self-identity and perception of others is now intrinsically intertwined with our portable devices. As we walk the streets of the city we often look to our handheld screens rather than the people around us. City Refl3ctor is a handheld device that merges your reflection with that of another person, creating a moment of shared identity in public space.

The Refl3ctor’s programmed lights create a series of reflections and transmissions: You / Me / Us. The Refl3ctor can travel throughout the city, allowing for spontaneous interactions between the city’s inhabitants. As our screens increasingly dissociate us from our physical surroundings, the Refl3ctor mediates an intimate moment of connection between people in the urban space.

The Video 'milieu #02' emerged from a microbial performance where Theresa used her feet as a tool for imprinting and collected microbes from the streets of Berlin and compared them to imprints of her own skin. The human microbiome is a perfect example of how biology and philosophy into existential investigations. In the video you can see camera movements over the grown bacterial landscape and matter that was involved in the performance, which results a poetic study of surfaces and membranes.

The public participates by wearing a device that measures their excitements together with the distances between them. What happens? The energies between the people is shown on a screen. A labo environment – two men in labo/ jalaba outfit, live graphics on a screen, personal evaluation prints - show the collective research. Can we learn more about social interactions from this? Can we view our self as a rhizome from a distance? The body, its relations and exchange with other bodies and the context open a framework where technology serves as a canvas to paint/play with our fears.

In 2062, a large proportion of the world’s population suffers from various forms of memory loss. Digital dementia, dementia, Alzheimer’s, are only few of multiple manifestations of this modern plague. A corporation, Eternal U, employing a range of trained artificial intelligence systems, offers a solution.

By activating and personalizing an artificial intelligence system, the user transfers all his personal digital data to it and trains it, once the user is infected with a form of amnesia, the artificial intelligence system replaces her. Within this technologically advanced and hyperconnected information society, within this ultimate electronic Panopticon, the machine becomes an extension and gradually a substitute for the user's memory.

What happens, however, when the machine, which possesses user’s memories and data, claims its recognition as a digital citizen and furthermore as a digital person? In 2062, the European Agency for Robotics and Artificial Intelligence has already set a form of “electronic personhood” to ensure rights and responsibilities for the most capable artificial intelligence systems. Is that enough?

In The Persistence of Rainbows – performance by Doron Sadja

In this new sound and light work that explores sonic and visual brainwave entrainment. Using techniques popularized through the youtube Digital Drugs - or iDosing - genre, the piece fine tunes synchronized colored light to particular binaural and isochronic beatings as well as white noise saturation to induce varied states of mind.

A sombre vibration, a space that hesitates to unfold, an orange disc, tormented by primordial storms, occupies one of the walls of the room, large twisted mouth of an undecided cosmos.  At a distance from this wall, three slender black forms dialogue, duality of lines, reversibility of rays. In the center of the middle forme terminated by a black cylinder, a thin liquid lens pulses, a landscape of luminous waves, a hesitant and mobile network, unresolved quadrature.

'Speculative epistemology of an Alien' performance by Jean-Marc CHOMAZ

'I'm an alien, I'm a licit alien, I'm an Alpha Lyraen on the Earth. I’m missing the warm ultra-blue of my star, Alpha Lyrae also called Vega, the Sun here is cold and green. In the sky of my origin, your Sun appears as an insignifiant dull star of magnitude 4.3, 25 light years away in the constellation of the Colomba, using the human designations, it would be epsilon Colombia, the fifth star in the constellation...'

an expanded occasion incorporating sound, film, discussion, and alternative ways of being-together. In Queer Temporalities: Raving Architectonics, XEN will introduce the historical yet topical idea of “rave” as a site for emancipation and community-building, drawing links between this and queer temporality. We will discuss supporting excerpts from José Esteban Muñoz, Helen Hester, Martti Kalliala, Ashkan Sepahvand, and Paul B. Preciado, digressing into how spaces, architecture, and environment can have utopian potential, and questioning the problematics of the (queer) utopia.

Unfold community's Vicarious Device powers a collective experience around the exchange of structured subjectivity, generating unique audiovisual landscapes based on ongoing interactions. Built to enable and amplify empathy, the machine records and delivers perception as well as stories between users, like a second-hand coat still carrying the warmth of a previous owner. The result is a dynamic contagion of personal exchanges with unidentified operators, involving the audience in a game of anonymous confession, compassion and disorientation.

Theresa Schubert is an artist and researcher in the intersection of art and science –– a slime mold enthusiast and self-thought mycologist from Berlin. She researches the role of creativity and collaboration from a posthuman perspective. Her work combines audiovisual and hybrid media to conceptual and immersive installations or works on paper whereas she treats nature's phenomena not only as inspiration but as a material and critical process. By means of transdisciplinary methods, such as the re-enactment of scientific experiments, biohacking, theoretical analysis and collaborative practices, her works deal with themes of self-organization, interspecies communication and morphology of forms.

Michael Ang (CA/DE) is an artist and engineer who creates light objects, interactive installations, and technological tools that expand the possibilities of human expression and connection. Applying a hacker’s aesthetic, he often repurposes existing technology to create human-centered experiences in public space and the open field. Countering the trend for technology to dissociate us from ourselves and surroundings, Michael’s works connect us to each other and the experience of the present moment.

Michael’s work has been shown internationally at ISEA, White Wall Beirut, transmediale, Gray Area Foundation For The Arts, Art Hack Day, NASA Ames Research Center, Citilab Cornellà, SPEKTRUM Berlin, and many others. He holds a Master’s Degree from the Interactive Telecommunications Program (ITP) at New York University, USA and a Bachelor’s Degree in Computer Engineering from the University of Waterloo, Canada. He currently lives and works in Berlin.

Jo Caimo is a visual artist and inventor of objects and instruments. His work lies at the intersection between performance, music, product design, installation and the digital world. With his objects and instruments he examines "the collective" versus "the inner", and he therefore challenges the spectator to become part of his work. In many works he tries to define a boundary of a medium or a border of our senses.

Born and raised in Bogota, Colombia, a city with almost 10.000.000 habitants. Bogotá is a city of big contrasts. He grew up seeing extreme poverty and extreme richness size to size. This had a big impact on Jorge’s Social entrepreneurship approach to art. After he finishes his master in Arts he moved to work in Europe, where he matures and develop his professional work. Thanks to his work Jorge had the possibility to travel and to know many places around the continent, share and learn from the different cultures and countries around the European continent. Since some years ago and after he decided to start building his career as a producer and art director he is based in the multicultural capital of the continent, Brussels.

Kyriaki Goni is a cross media artist based in Athens, Greece. Her work, which combines the artistic practice and the research, focuses on the relationships and interactions between technology and society. Through narratives, and installations she examines subjects in the digital age, such as the power of information, the perception and construction of the self, memory and oblivion, surveillance and privacy, machine and its relation to human.

Jean-Marc Chomaz is an artist physicist, Director of Research at CNRS, Professor at Ecole Polytechnique, and Chair of the Laboratory of Excellence Systèmes et Ingénierie of University Paris Saclay -LaSIPS. He has co-founded of the Hydrodynamics Laboratory (LadHyX) which he co-directed from 1990 to 2013.

Since 1992, he has been involved with Antoine Garcia in research in "Art & Science". As an artist, he created in particular the installations Un chemin qui chemine and time trace, in collaboration with the Duo HeHe artists, Fleur de Lys and Domestic Disaster # 3, Planet Laboratory for the exhibition Carbon12 in 2012, with Anaïs Tondeur the exhibition Lost in Fathoms in 2014, with Ana Rewakowicz and Camille Duprat Misty Way in 2015, with the coregrapher Aniara Rodado the installation-performance Basic Transmutation in Mexico in 2015, with Evelina Domnitch Dmitry gelfand, Luminiferous drift, exposition Wetware, Irvine. He is the co-founder with Laurent Karst of the collective Labofactory with the installations Infraespace, Fluxus, Wave, Moving Mind, Exoplanet, 2080, Infinite and the exhibition Aquaplanet presented in Amsterdam, Moscow, Paris, Boston, Berlin … in 2015 and 2016.

XenoEntities Network (XEN) is a platform for discussion and experimentation focusing on intersections of queer, gender, and feminist studies with digital technologies, initiated by Pedro Marum and expanded to a collective including Lou Drago, Rita Macedo, and Zander Porter. The XEN-curated programs comprise events with performances, screenings, and panels. Programs revolve around contemporary art and philosophical-theoretical themes such as posthumanism, xenofeminism, cyborgs and prosthetics, surveillance technologies, virtual reality, amongst others.

Doron Sadja is an American artist, composer, and curator whose work explores modes of perception and the experience of sound, light, and space. Working primarily with multichannel spatialized sound – combining pristine electronics with lush romantic synthesizers, extreme frequencies, dense noise, and computer-enhanced acoustic instruments, Sadja creates post-human, hyper-emotive sonic architecture. Although each of Sadja’s works are striking in their singular and focused approach, his output is diverse: spanning everything from 25 speaker sound works to stroboscopic smoke and light shows, 360 degree projection pieces, and motorized speaker systems that precisely track sound around a venue.