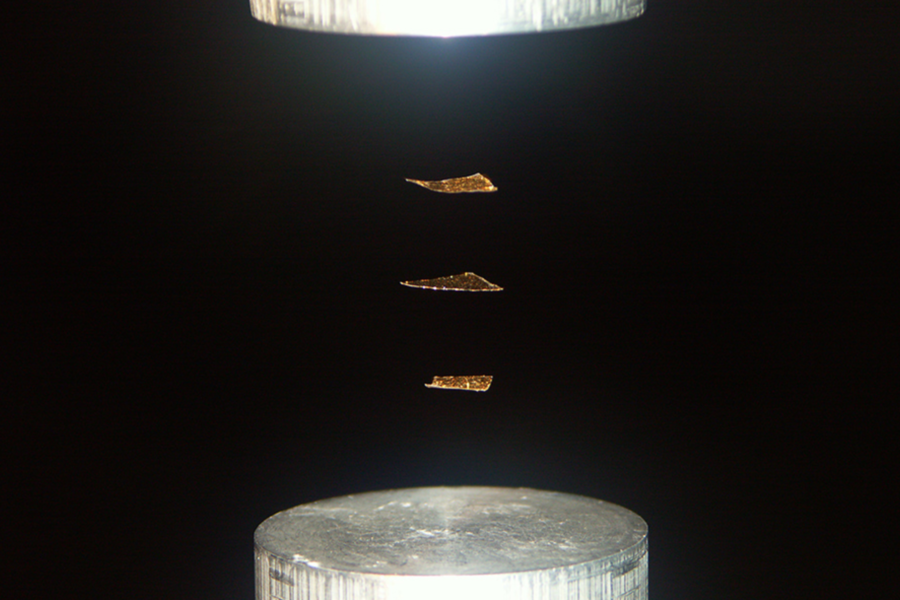 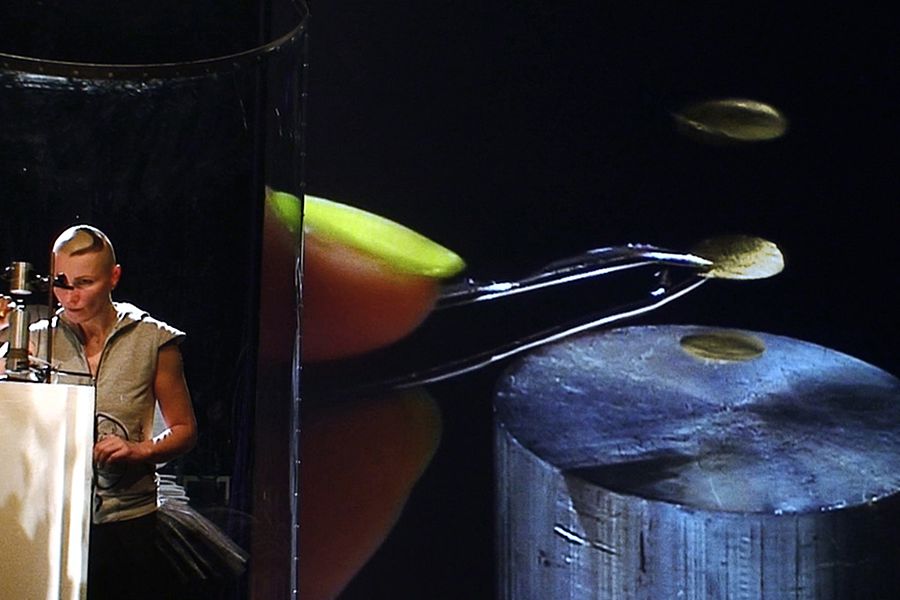 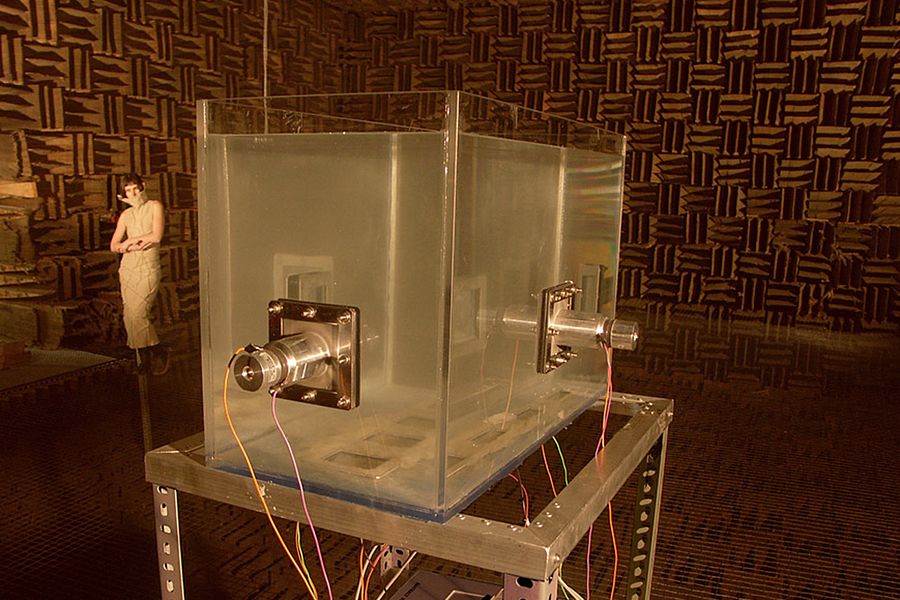 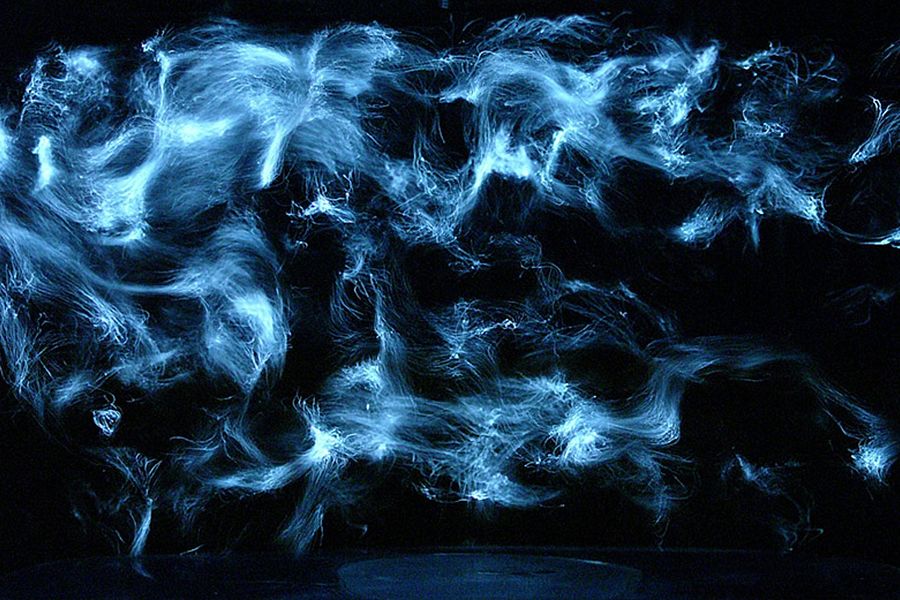 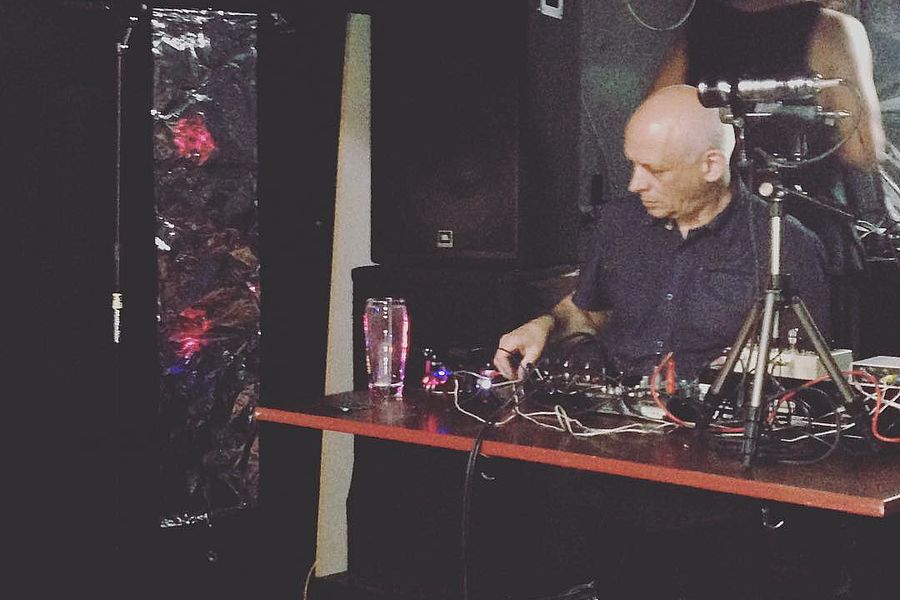 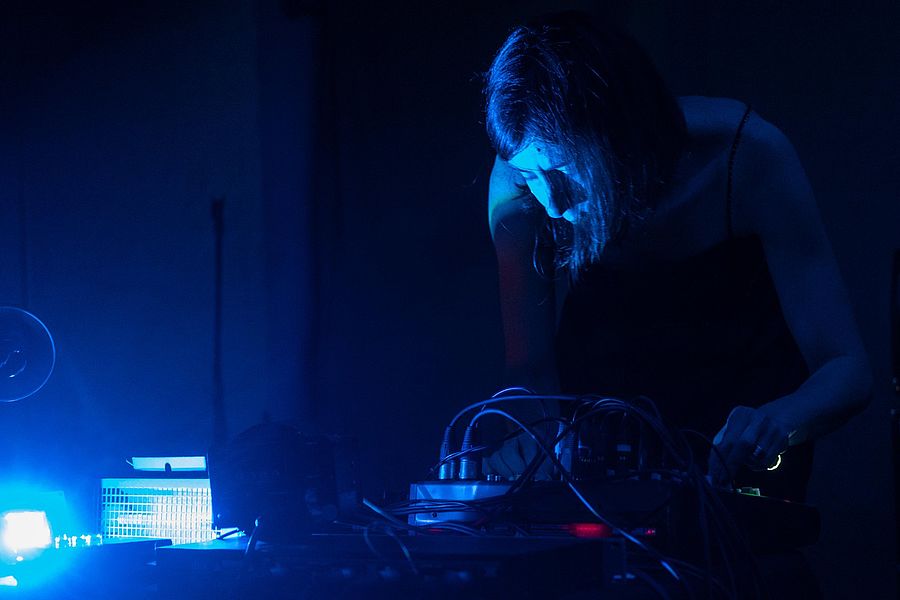 Materiality of Sound: In this chapter, we will present projects that get closer to the sonic phenomenon directly presented on stage in front of our eyes and ears as a form of scientific and artistic experiment. The materiality of sound, intended as a specific focus on using principles of the physical world to initiate a new listening into the matter, reveals the vibrational fundaments constituting our universe and unfolds the state of inter-connectivity in nature performing forces pervading multiple domains at the same time in the same space.

Sonic Vibrations is a series of hybrid events presenting scientific and technological research applied to sound-art, new musical instruments and installation art in form of exhibitions, conferences and live acts. Principles of Physics, Mathematics, Biology, Psychoacoustic, Body Anatomy and so on are used by artists creating media works which are pushing the definition of cross-disciplinary boundaries between technology and science applied to vibrational art.

Sonic Vibration is curated by Alfredo Ciannameo with the kind support of Musikfonds & Re-Imagine Europe project (funded by the Creative Europe programme of the European Union).

Sonolevitation – live performance. A 15 kHz acoustic vibration is vertically reflected at a precise distance from its source, generating a standing wave that levitates leaves of gold. The air between the intonator and the reflector is evenly divided into alternating areas of dynamic acoustic pressure and vacuous anti-nodal pockets. Within these pressureless voids, fluids and solids can be suspended and spun by the surrounding sound fields. An evocation of the weightless, frictionless environment commonly found in outer space is coupled with an extended opto-aural awareness of space-time itself: the floating objects modulate the frequency and amplitude of the standing wave that levitates them, consequently influencing one another's motion -- each part is an inseparable, co-emergent reflection of the whole.

Camera Lucida – installation.  Within a transparent chamber filled with water, sound waves are transformed into light emissions by employing a phenomenon known as sonoluminescence. After adapting to the absolute darkness surrounding the installation, one begins to perceive the fleeting configurations of glowing sound fields. Though it has been established that the source of light arises inside of imploding gas bubbles, the sequence of events, starting from the collapse and leading to photonic emissions, shock waves and jet formations, remains predominantly unknown.

After a great deal of research since the 1980s, numerous theories have been proposed, ranging from collision-induced radiation and quantum tunneling to plasma core ionization and even bubble fusion. No research, however, has been conducted on the implications of sonoluminescence as a perceptual tool. It is our intention to uncover this delicate bio-chemi-physical interface where the visible is the condition of the invisible (of the audible) and "where the inverse is also true, where invisibility [the disappearance of the observer in total darkness] is the condition of a new kind of visibility" (Tomas/Caillois/Minkowski).

Laser Bugging – installation/performance is a sort of sound/light alchemy, a play with light, reflecting materials and chemical processes. In the core of installation/performance is a reconstruction of Leon Theremin's "Buran" eavesdropping system, developed in 1945 for KGB. This system was based on monitoring of the acoustical windowpane vibrations by means of directed microwave radiation, produced by a military radio-location system. In my case the same principle was realized with the recent laser technology. By means of custom laser monitoring system, built around several cheap laser pointers, I explore and monitor normaly inaudible vibrations in many kinds of reflecting media: membranes, liquids, solid objects, listen the sound of water surface, bubbles, foil, plastic bags etc.

Phantasmata – live performance Artificial lights and other electromagnetic frequencies are passed through home-made micro-oscillators to generate sound waves. The field, transformed in electric current, passes through the circuit and exits in the shape of a sonic frequency, while the sound, modulated by manipulating the light sources, becomes tactile and synesthetic. The result is an hypnotic spectacle dominated by stroboscopy and industrial and noise-techno frequencies.

Dmitry Gelfand and Evelina Domnitch create sensory immersion environments that merge physics, chemistry and computer science with uncanny philosophical practices. Current findings, particularly regarding wave phenomena, are employed by the artists to investigate questions of perception and perpetuity. Such investigations are salient because the scientific picture of the world, which serves as the basis for contemporary thought, still cannot encompass the unrecordable workings of consciousness. Having dismissed the use of recording and fixative media, Domnitch and Gelfand's installations exist as ever-transforming phenomena offered for observation. Because these rarely seen phenomena take place directly in front of the observer without being intermediated, they often serve to vastly extend the observer's sensory envelope. The immediacy of this experience allows the observer to transcend the illusory distinction between scientific discovery and perceptual expansion.

Andrey Smirnov is an interdisciplinary artist, independent curator, collector, writer, composer. He is a researcher and senior lecturer at the Centre for Electroacoustic Music at Moscow State Conservatory, and a lecturer at the Rodchenko School for Modern Photography and Multimedia where he teaches courses on history and aesthetics of electroacoustic music, sound design and composition, new musical interfaces and physical computing. In 1992-2012 he was the founding director of the Theremin Center in Moscow. He has conducted numerous workshops and master classes in the U.S., Europe and Russia, and participated in various festivals and conferences. Since 1976 he conducts research on the development of electronic music techniques and gestural interfaces. His collection of the historical documents and original electronic musical instruments has been combined with extensive research into the history of music technology with broad experience in composition, interactive performance and curatorial activities. He is the author of the book Sound In Z: Experiments In Sound and Electronic Music in Early 20th Century Russia (2013).

xname is a solo project by Eleonora Oreggia, a London based conceptual electronic artist from Milan, currently fully funded PhD candidate in Media & Arts Technology at Queen Mary University of London. She makes performances and interactive installations. Her live compositions transform light and other electromagnetic frequencies in sound waves through self built synthesizers and complex semi chaotic machines. She is also the founder of Nebularosa, a record label promoting music that challenges the established modes of music production.