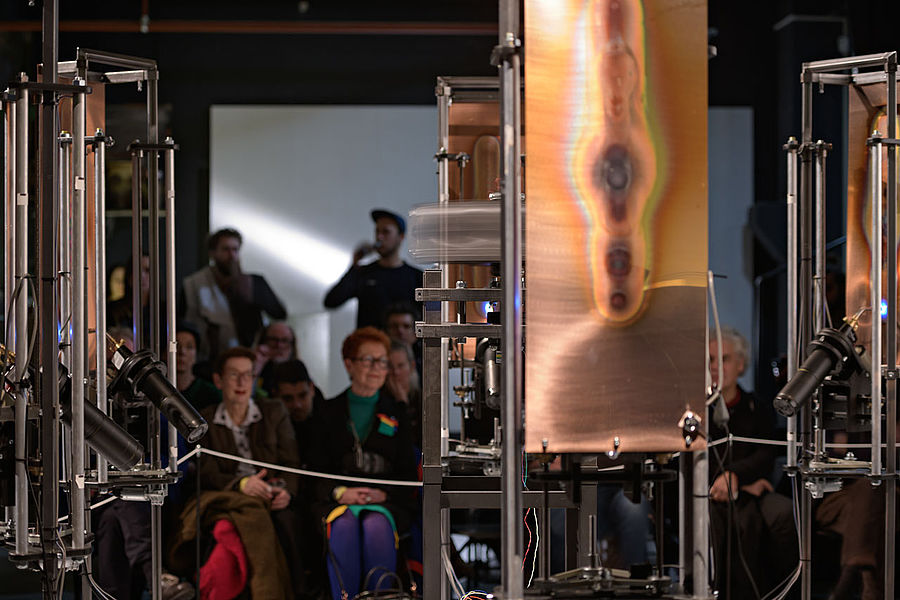 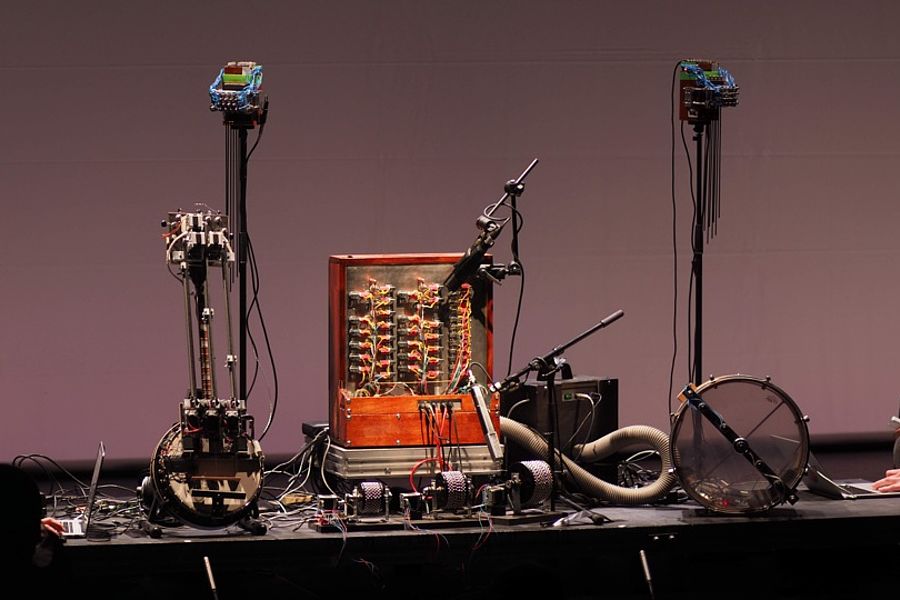 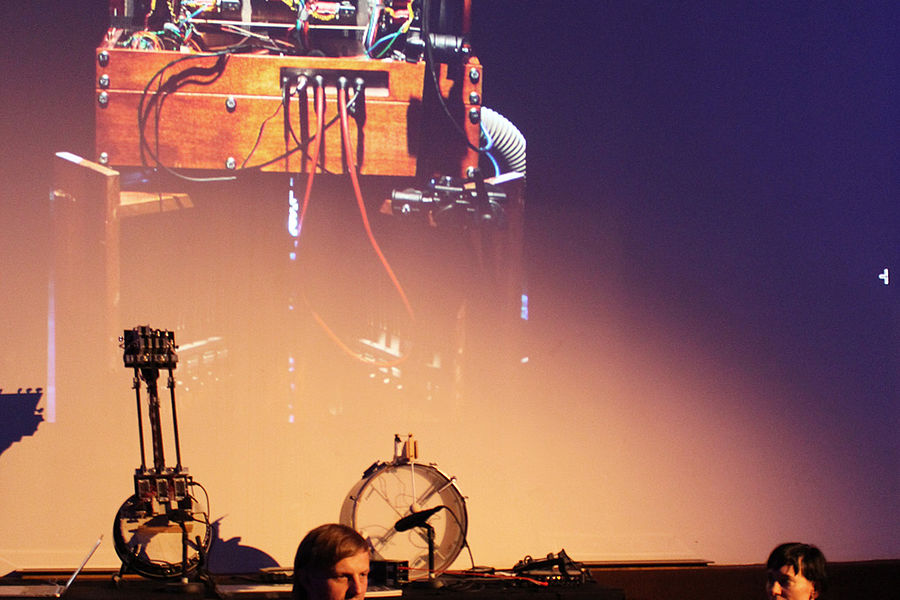 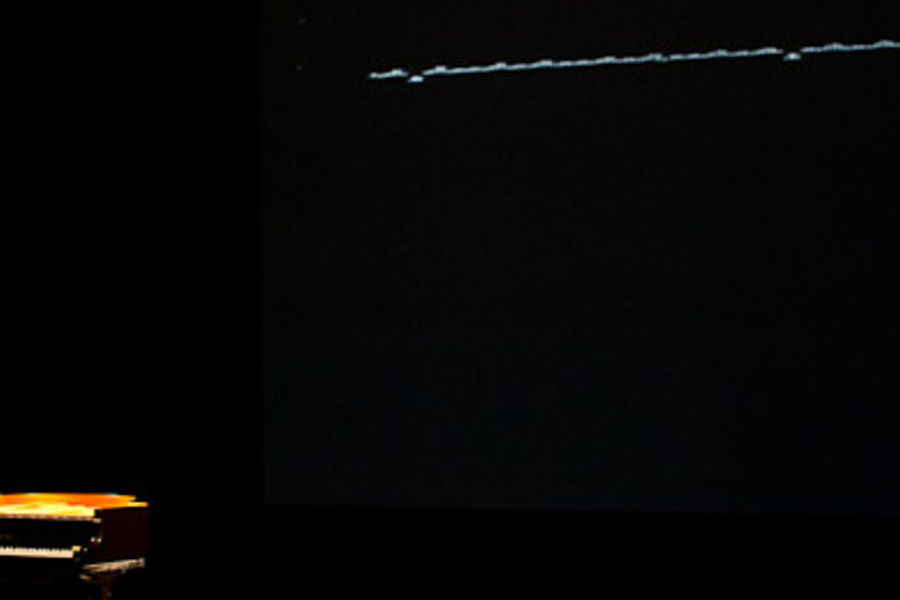 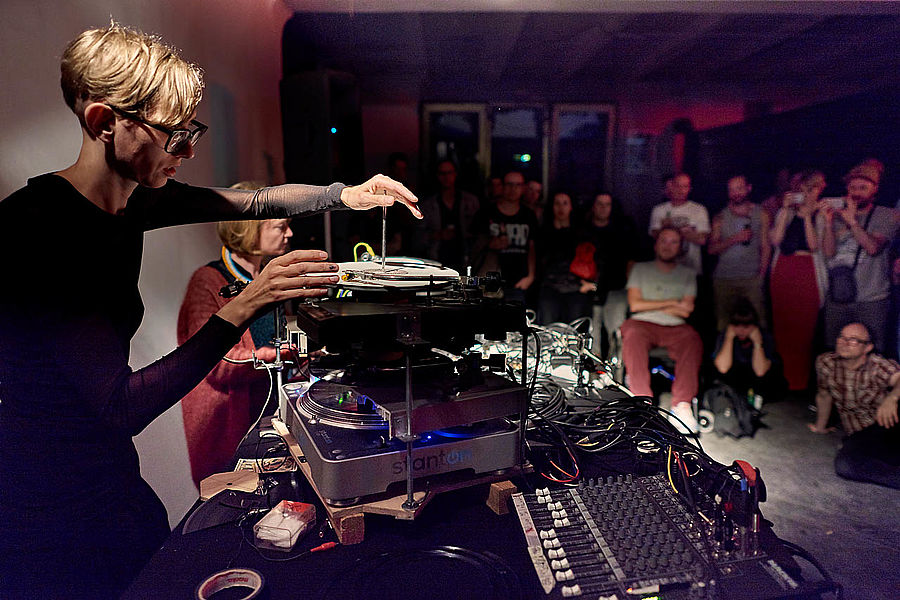 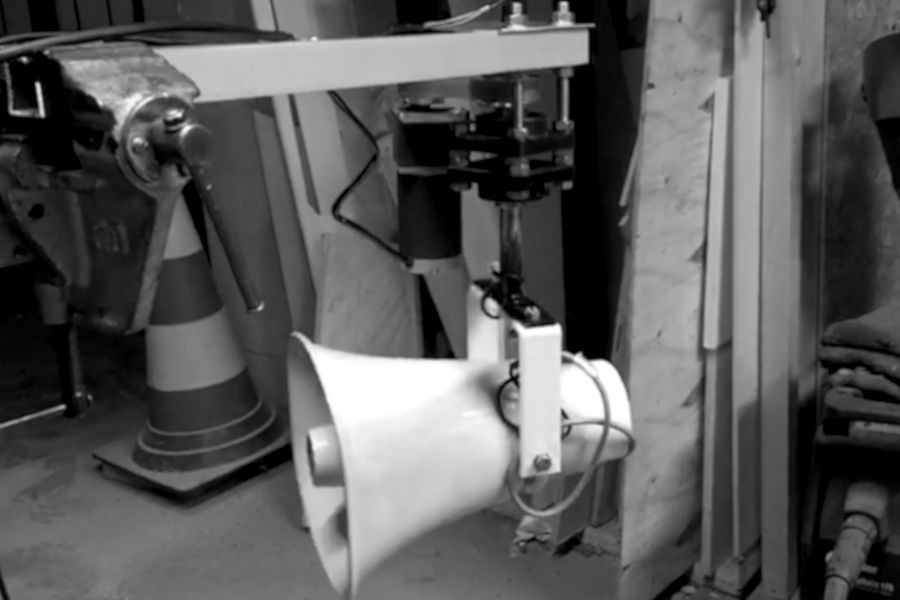 This sixth chapter of the Sonic Vibrations series presents projects exploring robotics for music in terms of movements of sound sources, mechanically controlled parts, computed synchronizations in order to create an over layer of kinetic automation in the musical instrument that becomes an essential aspect for the composition.

Sonic Vibrations is a series of hybrid events presenting scientific and technological research applied to sound-art, new musical instruments and installation art in form of exhibitions, conferences and live acts. Principles of Physics, Mathematics, Biology, Psychoacoustic, Body Anatomy and so on are used by artists creating media works which are pushing the definition of cross-disciplinary boundaries between technology and science applied to vibrational art.

Eight Studies For Automatic Piano – Inspired by the work of James Tenney, Gyorgy Ligeti, Charlemagne Palestine, and Conlon Nancarrow, Seth Horvitz's Eight Studies for Automatic Piano makes use of simple, computer-aided compositional processes to test the limits of human perception and machine precision. It relies on a bare minimum of technical means to explore notions of temporal distortion, iterative process, and elegant complexity. Presented in an immersive concert setting without the presence of a human performer, Eight Studies questions traditional notions of live performance and musical 'life.'

Aggregate makes musical theatre and plays computer-controlled music machines that they develop themselves. Gamut Inc's apparatuses translate antique acoustic considerations into a tonal language of now with focus on sonic textures – for that purpose gamut inc developed specialized software to control these machines live. Further on they use different forms of live-generated music scores to enable different degrees of composition and live improvisation between the machines, electronic sounds and “real” musicians, with whom they like to collaborate.

Dante’s Circle – A hybrid installation / performance is a collaborative audiovisual performance by Nicky Assmann and Robert Pravda in which continuously changing prismatic colors are created by burning copper panels with automated burners. The panels are positioned in a circular spatial setup and played as a live instrument. The sounds coming from the burners and heated plates are used as a source for the soundscape. This soundscape is further spatialized by means of a rotating loudspeaker setup which is placed at the center of the installation. The copper plates function as both the screens for the prismatic visuals as well as the acoustic reflectors for the projected sounds coming from the circle. As artifacts of the performance six burned copper screens will remain.

Camilla Sørensen and Greta Christensen: Vinyl Terror&Horror on rotating speakers system – powered by Klankvorm. The project Vinyl, Terror & Horror focuses on the relationship between objects and sound through different situations such as installation, sculpture, composition or as live performances. The project uses sound to create a narrative that always directly refer to the medium playing it or the situation it is presented in. The sculptural work includes amounts of various materials, where the live performances focuses exclusively on LP-records and turntables: vinyls are deconstructed and rearranged by using hacked, multi-tiered turntables, upside-down tone arms, and precision cutting devices to cut and recompose the records. All of this affects their sound output in a very direct way; creating cinematic soundscapes and a high probability of self-imposed 'hi-fi disasters'.

Gamut Inc was founded 2011 by computer musician Marion Wörle and composer Maciej Sledziecki to explore the interaction of electronic and instrumental music. The interdisciplinary ensemble consists of a growing number of autonomous music robots, which are controlled from computer. Their focus lies in sonic textures – for that purpose gamut inc developed specialized software to control these machines live.

Further on they use different forms of live-generated music scores to enable different degrees of composition and live improvisation between the machines, electronic sounds and “real” musicians, with whom they like to collaborate. Recent projects include for example the machine-music festival WIR SIND DIE ROBOTER in Berlin, THIS IS NOT A SWAN SONG – a music-theatre about the end, ONE MORE PIONEER – a piece about the relationship between human and technology, or the international festival AVANT AVANTGARDE – a travel in time to experimental music before the 20th century.

Nicky Assmann's work takes shape in the form of kinetic light installations, video-installations and live audiovisual performances and is embedded in a context of visual music, expanded cinema, and the concept of synaesthesia. Set against the backdrop of our visual culture, where the perception of reality increasingly occurs in the virtual domain, she returns to the physical foundations of seeing in which the embodied experience and the notion of affect are central.

Assmann was nominated for the 2015 & 2017 longlist of Prix the Rome and her work Solace gained an Honorary Mention in the 2011 StartPoint Prize. She has exhibited her work in a solo show at TENT Rotterdam and in group exhibitions at ao. the Saatchi Gallery [London], National Taiwan Museum of Fine Arts, Wood Street Galleries [Pittsburgh], Boxes Art Museum [China], Art Rotterdam Week, Quartier 21 [Vienna], V2_Institute for the Unstable Media [Rotterdam], Exit Festival [Paris] and the Biennial of Carrara.

Seth Horvitz (b. 1973, Los Angeles) is an interdisciplinary artist, electronic musician, composer, and designer whose work focuses on the relationship between human perception, iterative process, and the idiosyncratic behavior of machines. Most known for his extensive discographies as Sutekh and Rrose, he has experimented with the techno form since the mid-1990s.

Since completing the program at Mills in 2010 and relocating to London, he has presented his work at UC Santa Barbara’s Primavera Festival, Stanford University/CCRMA, the Mutek Festival (Montreal), and the White Box Gallery (NYC). He has also collaborated with visual artist Nate Boyce (video artist for Oneohtrix Point Never) for a presentation at the De Young Museum (San Francisco) and performed at the Forward Festival (DC) and Berkeley Art Museum using an obsolete CRT monitor as an instrument. His first collection of “Studies for Automatic Piano” was published by the LINE imprint in June 2011.

Greta Christensen & Camilla Sørensen are Berlin based sound artists. Both are graduated from The Royal Danish Academy of Art, Copenhagen in 2007/2008. They have exhibited at, amongst others, Malmø Kunsthal (SE), Rodasten Kunsthal (SE), Horsens Kunstmuseum (DK), Museet for Samtidskunst, Roskilde (DK) and Temporäre Kunsthalle, Berlin (DE). In 2015 they received Horsens Kunstmuseum's Art Prize, in whose collection they are also represented.