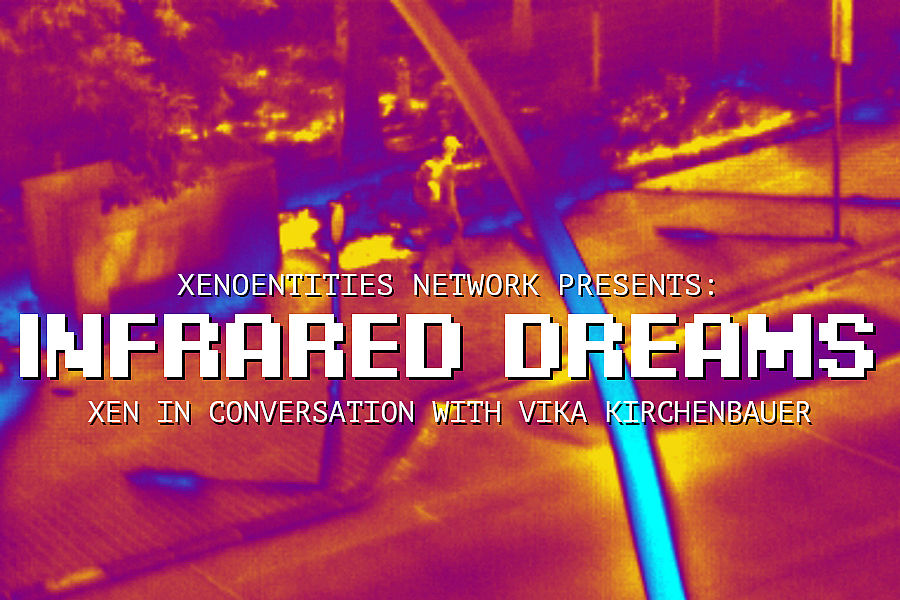 “The drone system is a stealthy achievement of capitalism and the nation state as a schizophrenic yet efficient and profitable way of organising labour and warfare.”

Vika Kirchenbauer’s essay Infrared Dreams in Times of Transparency (2014), brings attention to the myriad problems resulting from the vertical gaze of drone technology. While drone operators sit in air-conditioned offices, the dichotomies between ‘civilian and combatant, warzone and workplace’ are called into question.

Yet Kirchenbauer also illustrates the multifaceted hypocrisy of “advocating the ‘honourable’ way of ‘real’ combat” and proves how this hierarchy is “misleading and smells of essentialism, bloodthirst and abenteuerlust.” Against better judgement, she agrees to anthropomorphise the drones in question to better render an image of the power structures of oppression that filtrate both love and warfare.

Please join this XenoEntities Network (XEN) Assemblage in discussing this text in conversation with the author Vika Kirchenbauer.

We would like to highlight that XEN Assemblages are community meetings for an informal sharing of ideas, free of charge and where everyone is allowed to freely intervene and participate. Please bring along other texts or media that you would like to share and discuss.

Reading the essay in advance is recommended:
http://www.vk0ms.com/infrared_dreams.html

XenoEntities Network (XEN) is a platform for discussion and experimentation focusing on intersections of queer, gender, and feminist studies with digital technologies, organised by Pedro Marum, Lou Drago, Rita Macedo, and Zander Porter.

Vika Kirchenbauer is an artist, writer and music producer based in Berlin. In her work she explores opacity in relation to representation of the ʻotheredʼ through ostensibly contradictory methods like exaggerated explicitness, oversharing and perversions of participatory culture.

She examines the troublesome nature of “looking” and “being looked at” in larger contexts including labour within post-fordism and the experience economy, modern drone warfare and its insistence on unilateral staring, the power relationships of psychiatry, performer/spectator relations, participatory culture, contemporary art display and institutional representation of otherness as well as the everyday life experience of ambiguously gendered individuals.