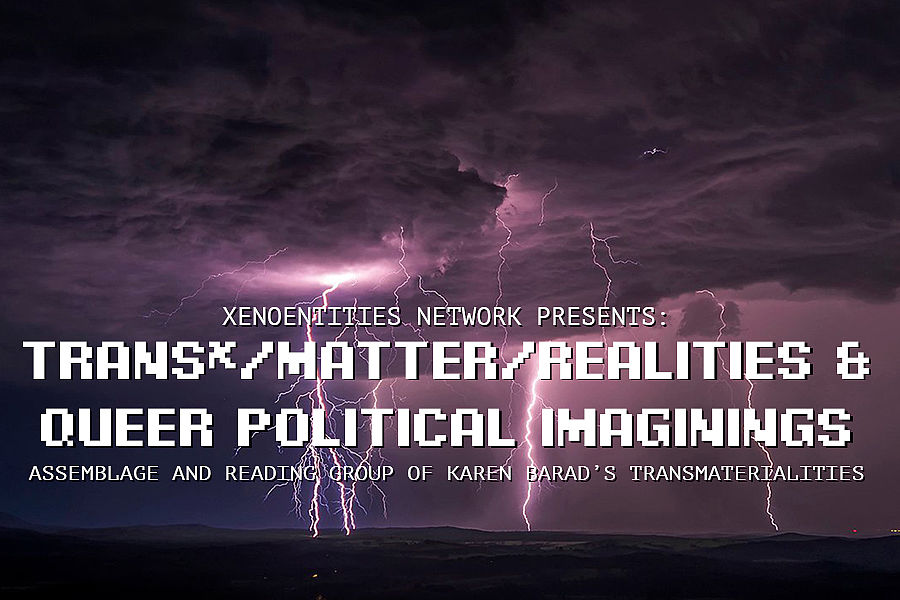 “Particle self-intra-actions entail particle transitions from one kind to another in a radical undoing of kinds—queer/ trans*formations. Hence self-touching is an encounter with the infinite alterity of the self. Matter is an enfolding, an involution, it cannot help touching itself, and in this self-touching it comes in contact with the infinite alterity that it is. Polymorphous perversity raised to an infinite power: talk about a queer/trans* intimacy!”

Karen Barad magnifies the atomic composition of various layers of the universe to speculate on the potential queerness of interactions between particles. Matter experiences a constant reconfiguration of its state, as Barad says, “experimenting with itself—the queer dance of being-time indeterminacy, the imaginative play of presence/absence, here/there, now/then, that holds the disparate parts together-apart." Highlighting the incongruencies and constant state of flux of all matter, Barad employs the electron as a tool to deconstruct naturalistic perspectives that dictate the notion of static identities and bodies, polarization and matter. Merging theoretical physics and feminist studies, Karen Barad draws on quantum physics to suggest that every unit of matter is in flux, a constant flow of intra-acting phenomena.

In this assemblage and reading group session as part of Welt ohne Außen, XenoEntities Network proposes a discussion of Barad’s article about matter’s experimental nature: “Transmaterialities: Trans*/Matter/Realities.” Barad draws on her theory of agential realism, an ontology that the universe comprises phenomena, which are "the ontological inseparability of intra-acting agencies," deploying a queer reading of various scientific phenomena to reinterpret their potentialities. The essay discusses the “electrical energy (that) runs through disparate topics in what follows: lightning, primordial ooze, frogs, Frankenstein, trans rage, queer self-birthing, the quantum vacuum, virtual particles, queer touching, bioelectricity, Franken-frogs, monstrous re/generations.”

We would like to highlight that XEN’s assemblages are community meetings for an informal sharing of ideas where everyone is allowed to freely intervene and participate. Please bring along other texts or media that you would like to share and discuss.

This event is part of Existential Futurities, a tripartite event cycle of performative curated-workshops by XenoEntities Network proposing alternative methods of being-together. Between traditional objects concerning image and text, XEN organizes queer strategies of sharing time with each other in sound, voice, and space.

Existential Futurities is presented as part of Gropius Bau's Welt ohne Außen, an exhibition open from June 8 to August 5 which features immersive artworks, live works, and workshops spanning from the late '60s to the present day.