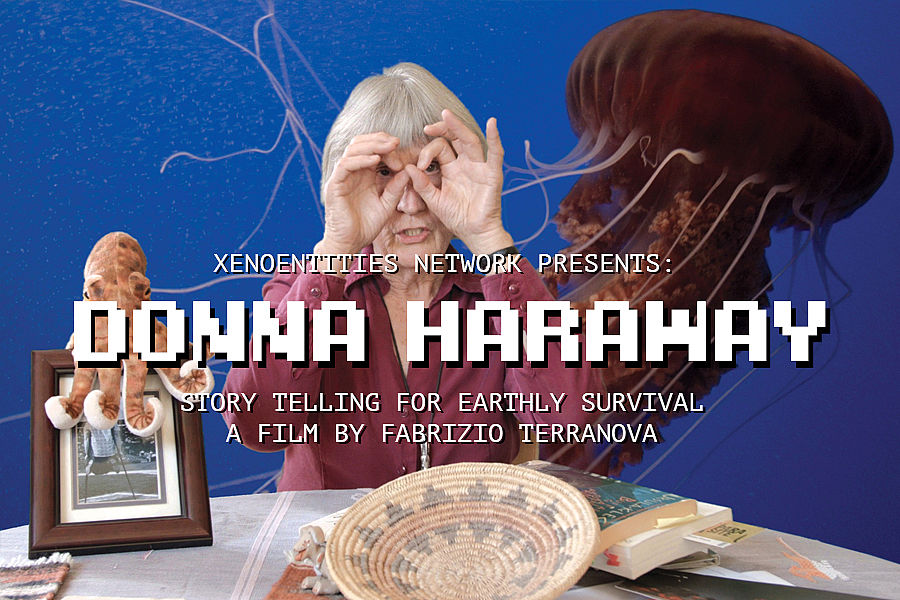 Donna Haraway is a gifted storyteller who paints a rebellious and hopeful universe teeming with critters and trans species, in an era of disasters. Brussels filmmaker Fabrizio Terranova visited Donna Haraway at her home in California, living with her – almost literally – for a few weeks, and there produced a quirky film portrait. Terranova allowed Haraway to speak in her own environment, using attractive staging that emphasised the playful, cerebral sensitivity of the scientist. The result is a rare, candid, intellectual portrait of a highly original thinker.

After the film screening we will have an assemblage to revisit Haraway’s “A Cyborg Manifesto.” After 34 years since its first edition, we hope to overview and analyse the manifesto’s influence on contemporary feminist and technological debates. Still seen as a cornerstone for intersectional discussion of feminism, technology, socialism, and materialism, “A Cyborg Manifesto” works towards a dismantling of patriarchal and naturalist discourses over the body and language.

This event is part of Existential Futurities, a tripartite event cycle of performative curated-workshops by XenoEntities Network proposing alternative methods of being-together. Between traditional objects concerning image and text, XEN organizes queer strategies of sharing time with each other in sound, voice, and space.

Existential Futurities is presented as part of Gropius Bau's Welt ohne Außen, an exhibition open from June 8 to August 5 which features immersive artworks, live works, and workshops spanning from the late '60s to the present day.